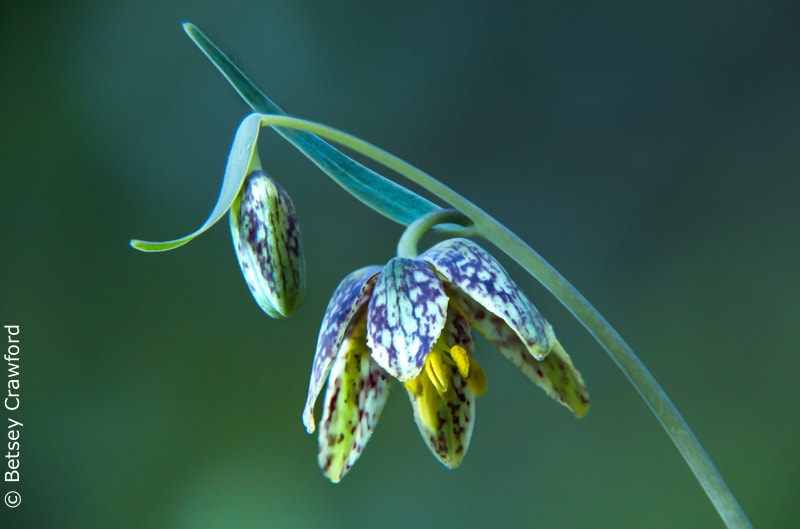 I was planning to write about transformation for Easter. I’ve been working on a series of essays exploring cosmologist Brian Swimme’s eleven powers of the universe, and what we can learn from these great cosmic energies. So far, I’ve done radiance, centration, and transmutation. Easter and this very welcome spring seemed like the perfect time to explore the power of transformation. However, before I could write a word, she came knocking at my door.

As a result, for the first time in almost eight years, I’m moving from the RV that has carried me to so many wonderful adventures to an apartment. It’s a very nice apartment, full of light, a balcony for flower pots, lots of green out the window, great hiking trails right off the property. It’s even in a town named after a wildflower — Larkspur. And it’s time. My partner, George, has been too frail for the roving life, so we’ve been settled in Marin, just north of San Francisco, for a couple of years. Though I love my compact little space, the trailer is 10 years old and needs work it doesn’t make sense for me to do at this point.

I’m both looking forward to the move and filled with poignance at the end of a wondrous chapter in my life. So for Easter, I thought I would collect a celebratory bouquet of flowers from our adventures and share some memories. I’ve included a few from the trails near my new home, since happy anticipation is always worth celebrating.

I still marvel at the chutzpah it took to get behind the wheel of a big pickup truck and haul a 33′ trailer to the end of my driveway, turn left, and head out into the unknown. By the time we got to the gorgeous Canadian Maritimes I was beginning to adjust. The Canadians are so nice they didn’t honk at my careful pace. We meant to spend three weeks. It was so stunning we spent six, always camped within sight of the sea. I didn’t start this website until 2015, but this gorgeous sunflower, one in a sunlit field of them, was featured in One big happy family: the Asteraceae, and is included, along with many other happy relatives, in the gallery Asteraceae.

Because my son, Luke, lives there, I’ve spent lots of time in Coeur d’Alene, Idaho. This photo of fairy bells is from the spring of 2012, when there was a northern super bloom of wildflowers. I was in heaven, and had one of those blessed epiphanies when everything you love comes together. I wrote about it in Life, tilted on another visit in 2015. Last year was another super bloom, and I updated the Idaho wildflowers gallery.

I have lots of pictures of the beauty we found along the roads we traveled. I included landscapes in Wayside beauty, but this lily reminds me of the hidden magic along the road. I was heading to the Waterton Wildflower Festival in Alberta in 2015, driving through a forest. I pulled into a roadside stop and while walking my dog, Splash, found a hidden glade filled to glowing with orange lilies.

Speaking of heaven, when I wrote about Waterton Lakes National Park in Latitude 49º 6′ 33.63″, Longitude -113º 50′ 58.92″ I announced that I had discovered its exact location. There are even gates, looking remarkably like Canadian national park entry kiosks. There were so many beautiful flowers, but this one has a slight edge as my favorite. It reminds me of poet Robert Haas’s line ‘The light in summer is very young and wholly unsupervised.” The Waterton Lakes gallery is full of other favorites.

The greatest adventure of all was Alaska, where we drove through endless sublime landscapes and watched grizzlies (from the truck!) twenty feet away. Since this is a bouquet, I’m sticking to flowers, like this monkshood from the Wynn Nature Center in Homer.  In love in Homer, Alaska described my love-at-first-sight relationship with that town. But just driving across the state line seemed to alter things, especially all sense of time.  I had one of the profound experiences of my life listening to the earth’s heartbeat in The Place Where You Go To Listen at the Museum of the North in Fairbanks. And another drifting through Denali. Bears and caribou and landscapes can be found in the Alaskan landscapes gallery, and lots more flowers in Alaska wildflowers.

At the southern end of the country, we spent a fair amount of time in one desert or another. A favorite place was the Anza Borrego Desert, and I finally did a gallery of flowers from that magical place after a visit last year. This vivid scarlet cholla was found in Arizona and has lots of company in the Cactus flowers gallery.

Southern Utah is one of my favorite places on earth. As many who have spent time in the desert have found, it fills me with both awe and introspection. That led to Moses in Utah, my most personal essay. And while I had Moses on my mind, I wrote A land of stone tablets, an early essay on what the earth teaches us about living on and with her. Those awe-inspiring vistas found their way into a Utah landscapes gallery.

We met wonderful people everywhere we went. This glowing yellow cactus was blooming along a trail to Corona Arch, outside of Moab, Utah. I started at the same time as a family: a man, his mother, wife, and daughter, and sister-in-law and niece. I walked faster than they did but kept stopping to take pictures, so we stayed relatively together though without much talk. At the end, getting to the arch requires climbing a rock wall that has holes drilled in it for your feet and rope ‘rails’. Then you have to climb a ladder embedded into another rock wall, but which doesn’t quite meet the top. So you stand at the top of the ladder, past the handholds, and scramble over the ledge.

Once I’d done all that I found the family spread out on the rocks, recuperating. “I’m going back with you guys,” I said, only partially joking. From that point they took me under their wing, letting me know when they were leaving, helping me down some slippery rock, and down those treacherous ladders. They started pointing out wildflowers they thought I’d like, and we had a great time. They were from Long Island, New York, as I am, celebrating the young women’s graduations from college. Oddly enough, at least a fourth, if not a third, of the people I’ve met on the road started life on Long Island.

In 2016 I drove to the prairies. I found them where I expected them: in Kansas at Smoky Valley Ranch in the west and the tallgrass prairie in the center of the state. And I found them where I didn’t expect them: the Pawnee National Grasslands in northeast Colorado and spread out all over southern Missouri. Missouri was a particularly joyful time because of the people I met there. I even met an adventurous baby bird. I was so ecstatic at what I found I made galleries for each place.

In California, we spent several early stretches on the coast in Malibu. We have family in Los Angeles, and George had health problems we dealt with in Santa Monica. So I got to spend time in the Santa Monica Mountains. There are many wonderful flowers there, which I used in an essay on a weekend spent with Joanna Macy. I’ll do a gallery one day. In the meantime, this Dr. Seuss-like character, covered with pink fuzz, particularly enchanted me.

Which brings me back to Marin County and my new apartment. Southern Marin is presided over by Mount Tamalpais. A woman from Australia told me that she had heard there that everyone who lives in this area has been called here by the queen herself. A lovely, mysterious idea. If true, she has now called me even closer, to live on her wooded flank. There are great wonders there, like the fritillaria at the top of the page, blooming on one of my favorite trails. And this tender trillium, in full bloom in early February. Wildflowers can start blooming here before New Years, which makes me very happy.

There are tiny orchids on Mount Tam, and stately iris, a plant I particularly love. Neither of these is rare, but Marin is what’s called a rarity hotspot, partly due to the difficult chemicals in a lot of its rocks. There is so much life here, it inspired Wild abandon: the mystery and glory of plant diversity.

So I have been and will remain surrounded by beautiful beings on all sides. Among them are many people actively working on saving our magnificent planet. My journey is now with them all: the flowers, the forest, the sea, the people. I’ll keep reporting on whatever it is that Mount Tam has in mind.

I’d love to have you join me! If you add your email address, I’ll send you notices of new posts.

6 thoughts on “An Easter of memory and anticipation”