There is a great mystery on this journey: the fact that I seem to choose some places to go, and that others call me to come. Alaska called. Before leaving home in 2011, I never gave any thought to going to Alaska; in the mayhem of leaving I barely gave thought to where I was going once I pulled out the driveway. But almost as soon as we left, Alaska started calling. And, every time I looked at the map, the voice seemed to be coming from Denali, the ‘Great One’ in the Athabascan language, the mountain and its surrounding wilderness, which create one of the largest preserved areas in the country. The only vast wilderness in Alaska with a road through it: a single road, two lanes at its best, 92 miles long.

Despite that persistent call, the realities of visiting the park almost put me off.  In order to penetrate this wilderness, you need to spend 8 to 11 hours, depending on how far you go, on the equivalent of a school bus. This had little appeal to me, though I would have done it. But it would have been impossible for George. He is happy to have me go off on my own adventures, but this was a call to go together.

One evening, at our RV park in Seward, I started chatting with our neighbor. We discovered we were from the same part of the world, both full time travelers, so had lots to talk about, including the places in Alaska she had already been. She told me that they were able to get a pass to drive their own car through Denali because her partner has MS, and would not have been able to deal with a day on the bus.

So we went, and got the pass, good for four days, from a warm and helpful ranger. As we drove in the first day, I got teary, and George told me he had goosebumps. I went all four days, George three. The second day I planned to hike and see what wildflowers were still around, but, on discovering the amazing lichen world in the park, spent most of the afternoon lying on the ground. The third and fourth days we had a quick view of Denali itself, shimmering in the distance, having briefly emerged from its usual shroud of clouds. The last day we just kept driving, and went the entire 92 miles in and back, a nine hour adventure, discovering, at the far end of the road, a world of bog and muskeg different from the rest of the drive.

Denali, though full of beauty, isn’t the most beautiful or the most intriguing place I’ve seen, and people don’t go for that reason. Its lure is the ability, via the road, to see the wildlife living and roaming freely within a sliver of its 5 million acres. The original impulse to create the park was to conserve this wildlife. And there’s plenty of it: we saw caribou, moose, eagles, ptarmigan, and lots of grizzlies, one digging up roots less than 20 feet away from us. (We were in the truck, needless to say.)

I loved seeing the animals and birds, and the flowers and lichen, but there was something about the land itself that made it hard to take my eyes off it. Denali is subarctic wilderness, definitely not a showy landscape, with lots of low shrubs, dark green spruce, small scale wildflowers, and grasses, acres of moss, tons of lichen. They are all native to their place. With few roads to carry plant invaders, native plants have been able to form a vast, millennia-old ecosystem that supports both the animal life of the park, and the Athabascans, who have a 13,000 year history there, and still use the park for subsistence hunting and gathering. 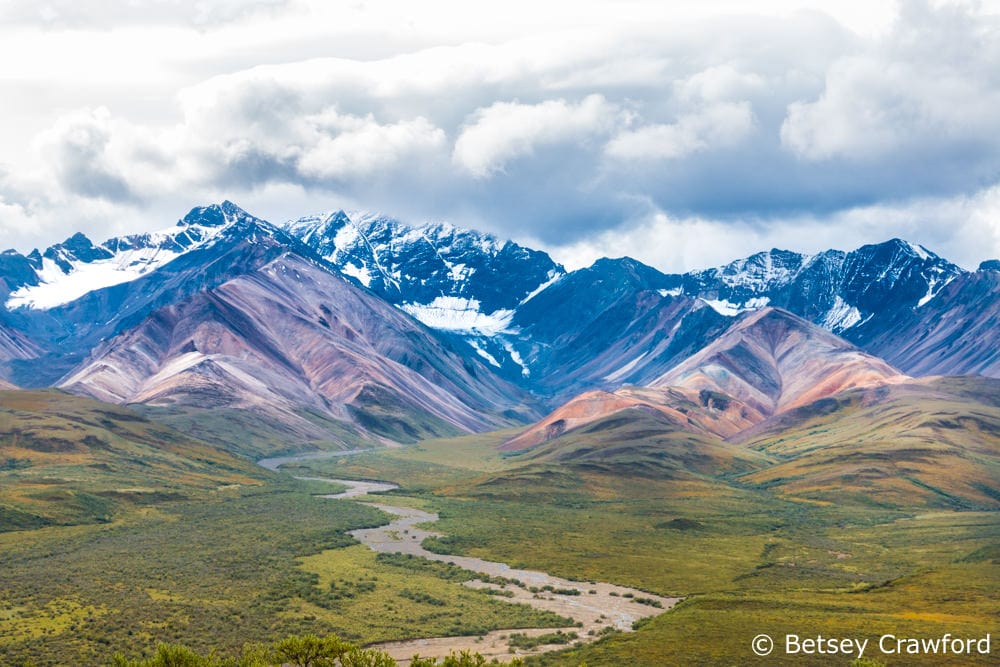 It filled my soul to float through mile on mile of this subtle tapestry of greens, browns, tan, yellows, punctuated with rivers and ponds, rimmed with snowy mountains, usually under a moody gray sky. To see the mountain itself show up one evening as the sun set on its western flank, and then to see her luminous presence the next morning, before the clouds veiled her. To lie on the ground with lichen. To see the last of the wildflowers. To have caribou walk by on the road, heading in the opposite direction. To watch a bear at close range.

There is a crucial magic about this. It’s not just about seeing the animals, or the landscape. It’s about knowing, as we build and pave and improve and fix, that there are enough places left for life to go on as if humans were not rushing to dominate the rest of the planet.  Denali is one of the places where the heart of the world can beat undisturbed, and that is what makes it so important.

Why the call? I have no answer. The calls seldom explain themselves. The landscapes they leave on the heart take time to make their difference. I may never look back and say, this happened because I was there. But Denali called, I went, and I am changed.