The lines showed up one morning, on a section of my walk where the sand, driven over by a tractor, is unusually soft and easily shows imprints of desert wildlife. Lizard tails, I thought. I checked carefully for signs of tiny lizard feet but didn’t see any indentations along the lines. About a mile on, they showed up again, this time in the dry desert sand. So it had to be something with enough weight to mark that crustier sand. Still no footprints. Snakes, I thought, and, when I saw that several lines converged at a hole in the desert floor, I took that as confirmation. 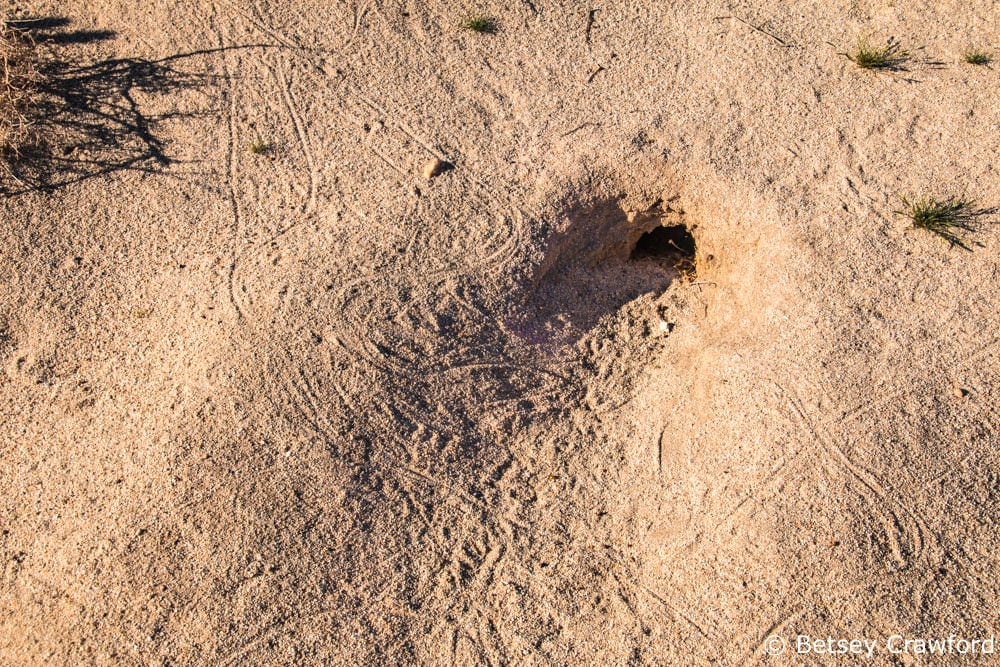 More lines showed up each day. They kept converging on holes. They often led to the base of bushes. They hadn’t shown up until it was pretty hot. All that pointed to snakes, who like the warm weather, though coil themselves in the shade of desert shrubs when it’s too hot. They live in holes in the desert floor, protection from both too much heat and too much cold.

Then I remembered that snakes move in curves. I checked. They can move in straight lines, by straightening their scales and scooping themselves forward. That sounded exhausting; something a snake would only occasionally do. So I was back to lizards. I took my pictures to a ranger at the Anza Borrego State Park office, and she went through the same line of reasoning I did: lizards, then snakes, back to lizards. Except where were the feet? The cluster of lines around the hole made her think it might be a family of snakes.

I showed her other lines. Ravens walking in the same soft sand. Something with small, round footprints that, she said, might be a young coyote.

I don’t see a large variety of desert wildlife on those acres. Tiny lizards occasionally zip by. I hear coyotes calling and yipping at night, but seldom see them. Vultures sail overhead on wide, dark wings. 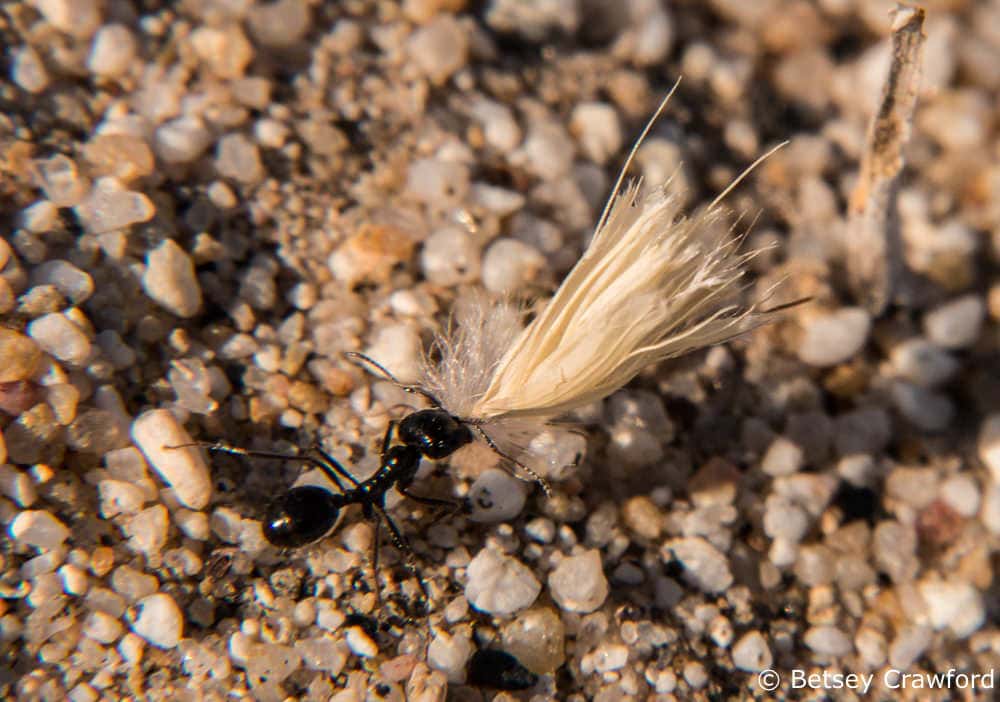 There are lots of roomy anthills, with armies of industrious ants, like this one, who, with a dozen compatriots, was taking seed heads from one place to another. I saw one rattlesnake but would have missed it if it hadn’t given me a mild rattle to keep me in my place. I’ve only seen one lizard I thought big enough to make lines in the crustier sand — a handsome white one, eighteen inches long, with a sculpted head and back, regally crossing the street one hot afternoon.

White-winged doves coo and forage, two ravens perch on a utility pole on a semi-permanent basis, hummingbirds routinely buzz the back of the trailer and then disappear. Speckled beetles move swiftly in varied directions. These are profound energies that I walk among — lizard, coyote, raven, snake, hummingbird — acknowledged by their long and deeply held roots in many cultures’ lore. The ancient sage, the trickster, the magician, the great mother, the call of joy. Though I don’t always see my companions, I see the lines they leave, weaving their lives with mine, our song lines intersecting as we pass through the sun and shadow of the desert.

We are woven together by more than our interlacing footprints. Evolution holds us all in its patient embrace. I share 85% of my DNA with the coyote whose call heralds the desert night. Though my ancestors and the lizards’ ancestors parted evolutionary ways a few hundred million years ago, we are still tied by many strands of DNA, governing the most basic elements of our mingled lives.

On my last evening in the desert, while looking for photos for this post, I found this one of a desert thoroughfare: Siegfried’s tractor, my footprints, my dog Splash’s paw prints, some other small round footprint on the lower right. Lots of lines.

Studying them, I realized that the lines on the mid and upper right do have feet on either side of them. So I was back to lizards. But there are many that don’t look like that, so snakes are still a possibility. Or both. Or something I haven’t thought of yet. It’s a mystery.

And will remain so. I went out on my last morning to check again for footprints along the lines. But another profound energy had swept in: a 35 mile-an-hour wind. All lines and footprints had been softened into gentle undulations in the sand, all distinctions erased.

12 thoughts on “Mysteries at my feet”