The gold rush: the joyful power of goldenrod

One of the blessings of a visit to New York late last summer was seeing something I miss in California: a world awash in goldenrod. A member of the vast and happy Asteraceae family, Solidago canadensis, one of a hundred species of native goldenrods in the US, overflowed fields and banked roadsides near my sister’s house in the Adirondacks. Filled with tiny yellow daisy-like flowers up close, looking like an explosion of yellow fireworks from a near distance, and like a sea of sparkling yellow foam from a greater distance, goldenrod is the late August and September wildflower in most of the country, along with its aster companions.

In her passionately wise and luminous book, Braiding Sweetgrass, botanist Robin Wall Kimmerer tells the story of her first interview with her advisor at the State University of New York’s School of Environmental Science and Forestry. Why, he asked, did she want to study botany. She had her answer ready: she wanted to know why goldenrod and asters look so beautiful together. His answer was crushing. That, he said, was not a valid reason to study botany. Such considerations belonged to art, not science.

Luckily for us, she was, though daunted, not discouraged, and later found other, more sympathetic teachers and mentors. But for a while, she left the indigenous knowing of her heritage behind while studying science as it was presented in her courses. It wasn’t until she was studying for her Ph.D. in Wisconsin that she found herself at a gathering of native elders who could speak of the depths of plants in ways her botany classes had not: their relationships to other plants, to the places where they grew, to the animals, birds and humans in their midst. The stories of their origins and names. The wisdom they have to share.

And their beauty. As an artist, I would have happily explained (as artist friends did) that yellow and purple look so beautiful together because they are complementary colors. Each primary color, in this case yellow, has a complement composed of the other two primaries, here red and blue, creating purple. Complementary colors have a powerful synergy, both making the other zing, creating a combination more electric than, for example, pink and purple. However lovely the latter combination, it will always be less exciting to our brains than pairing purple and yellow, or orange and blue, or red and green. These are not the combinations you’d think of for a meditation garden. But if you want to look at a field of scintillating color, or add excitement to your garden, your painting or your wardrobe, interweaving complements is a surefire way to do it.

Other than red flowers against green leaves, nature hasn’t gone out of her way to combine complementary colors. And red flowers are relatively rare, orange even rarer, and true blue almost nonexistent. Purple is fairly common, and yellow abundant. All are dwarfed by the numbers of white flowers, which offer no opportunity for complementary drama. So it’s especially striking when nature has not only combined complements but thrown them about with as much abandon as she has goldenrod and asters. Robin Wall Kimmerer was talking specifically about New England asters, with their deep purple petals and deeper-than-goldenrod yellow centers. The stronger the purple, the more scintillating the combination, though with the many lighter asters, and with the pink-purple thistle shown here, the combination is still electric.

But I agree with her about goldenrod and New England asters: their combined gorgeousness is a perfectly good reason to want to study botany. And while it may be true that aesthetics are not the province of science, there’s fascinating science connected to beauty, starting with the exquisitely sensitive cones nestled in our retinas. Millions of neurons, waiting to encode for our brains the light waves bouncing off the world around us. Two-thirds of our cones are dedicated to the longer wavelengths of the warmer colors — like the yellows of goldenrod. Another third is devoted to the seeing their green leaves. Only 2% of our cones are reading the purple aster petals, which reflect back the shortest wavelengths of light.

Why yellow and purple? Carotenoids in the goldenrod and aster centers, and anthocyanins in the aster petals. Chemicals that reflect those colors back to us, and, among other things, protect the flowers from too much of the ultraviolet light we can’t see, and that burns both our skin and the petals’. To bees, who can see in the ultraviolet spectrum,  goldenrod’s yellow is even more incandescent than it is to us. But they hardly need the pizazz. There are so many solidagos, with so many individual flowers per plant, in so many places that they can’t be missed. Bees abound in those fields, picking up the sticky, heavy pollen and bringing it back to the hive to make bee bread for the winter.

I think it’s the sheer exuberance of the solidago phenomenon that I love so much. This is nature at her most joyful, maybe even her whackiest. Why not throw millions of luminous yellow flowers out there as most other flowers fade? Throw in some purple for dazzle! Turn the neighboring leaves vivid red and orange! Provide winter food for thousands of tiny creatures who return the favor by pollinating the flowers. Create larger creatures to stand in the fields, with carefully crafted eyes connected to brains capable of awe. Fill them with wonder at what has been wrought. Those wildly yellow early autumn fields are a sign of a creation that can’t be stopped. 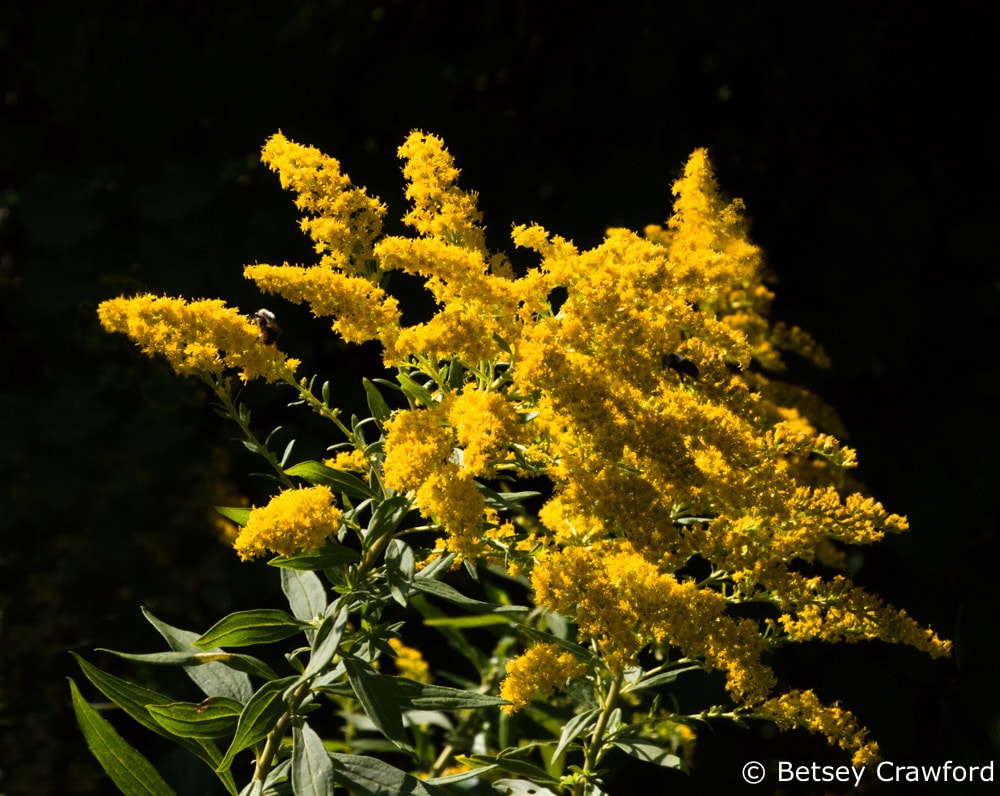 I take a lot of comfort in this vast energy. Although such fields are plowed and bulldozed daily for grazing or agriculture, houses or parking lots, this sheer vibrancy tells me nature is far from fragile in the face of her heedless humans. Another essay in Braiding Sweetgrass details the destruction of Lake Onondaga, sacred to the Onondaga people of upstate New York. After more than a century of pumping industrial waste up to sixty feet deep into and around the lake, along with the sewage of the growing city of Syracuse, it’s now a Superfund site. In fact, nine Superfund sites. Long gone are the wetlands, the trees, the oxygen-generating plants, the moss, the birds, the frogs, the once crystal clear water.

The same story can be told of countless places. The details vary, the heartbreak is painfully similar. There is a lot of restoration going on, even if grudgingly on the part of the corporations and governments that caused the destruction. People the world over are pulling beloved, damaged places back from the brink. The same is happening with Lake Onondaga. There are attempts, some good, some bad, to restore a semblance of natural life to this dead landscape. Of the ones described in the essay, my favorite is the work being done by nature herself, who sent the ‘oldest and most effective of land healers…the plants themselves.’

Seeds of trees took root in the white, gluey sludge and slowly grew. Birds landed in their branches and dropped the seeds of berrying shrubs. Clovers and other legumes, among the most important of our plant allies, arrived and began pulling nitrogen into the muck. The endlessly adaptable grass family moved in. Their roots add humus, and the first glimmering of soil making can be seen.

It’s a slow process of enormous strength, and one we can trust. That’s where I take comfort. Of course, we should be doing everything in our power to stop the destruction and repair the damage. Nature should be able to rely on us, too. But as she asks, she also inspires.  When we need courage, and ardor, and zeal for this work, she invites us to stoke those fires by standing in the midst of a sea of goldenrod as it pulses with energy, radiating her vibrant, enduring, indomitable heart.

Transcendence on the headlands

One big, happy family: the Asteraceae