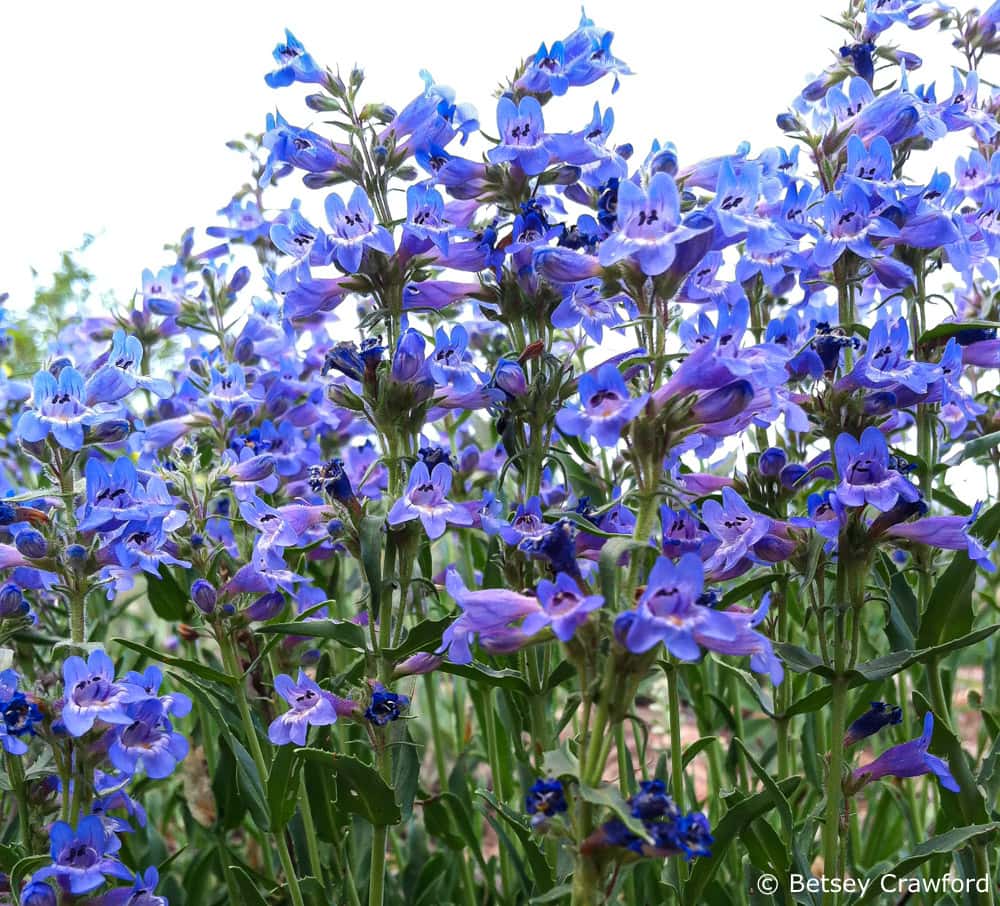 One early May day some years ago I was walking with a friend in a preserve near her home. I had discovered the trail the day before and was so delighted with the abundance of wildflowers I wanted to share them with her. She was equally delighted. And then, as we finished the trail, said, “I’m so glad I came with you because I would never have noticed the flowers if you hadn’t shown me.”

I was shocked. The flowers pictured here were everywhere, in vivid purple, white, yellow, orange, extra luminous under a pale gray sky. To my eyes, they were not only impossible to miss, but jumping at me. My friend is a woman of great intelligence and compassion. Her home is a warm haven, full of her exquisite sensitivity to color and texture. She wears beautiful blends of pinks, magentas, purples, turquoises. She sends me pictures of gorgeous sunsets from all over the world.

This is a perfect example of plant blindness. It’s a common phenomenon and a dangerous one: as a culture, we won’t take care of what we don’t see. Though 57% of endangered species are plants, there is a reason the World Wildlife Fund uses a panda as its symbol. We are much more acutely attuned to animals than plants. And the more like us — those with eyes facing front, for example — the more we identify with them, a trait we share with other primates. Thus, despite that endangered 57%, and the fact that 28,000 species are used in medicine, only 4% of federal endangered species funding goes to plants. But if you don’t save the bamboo forest, there is no way to save pandas. Extinctions don’t just happen — the ecology and habitat around the animal or plant change faster than a species can adapt.

Botanists Elisabeth Schussler and James Wandersee coined the term plant blindness in the 1990s. The students they tested — in the fourth to seventh grade, all in the U.S. — were twice as interested in animals as plants. Only 7% expressed interest in the science of plants. Since that time so few people are studying botany that university departments are closing globally and funding is drying up. The students that do exist are more interested in molecular botany, designing engineered plants for commercial applications. This means that there are and will be fewer and fewer people who can educate people about plants. At the federal level, there is one botanist for every 20 million acres of public land.

“We define plant blindness as (a) the inability to see or notice the plants in one’s environment; (b) the inability to recognize the importance of plants in the biosphere and in human affairs; (c) the inability to appreciate the aesthetic and unique biological features of the life forms that belong to the Plant Kingdom; and (d) the misguided anthropocentric ranking of plants as inferior to animals and thus, as unworthy of consideration.”

Schussler and Wandersee hypothesize that we are wired for this bias. Millions of bits of information hit our retinas every second and need to be drastically sorted to be processed by the brain. Thus movement, common to animals, will attract our attention. Faces are compelling. Danger gets an instantaneous response. Things that are easily differentiated are preferred. Our brains are busy, and the quiet, static nature of most plants, mostly green, easily fades them into the background.

It’s easy to imagine, as our ancestors began to walk the African savannas, that evolution would have prepared us to respond to animals as sources both of danger and nourishment. But we also evolved to see red and green preferentially and to see more different shades in the green spectrum than in others. Theories suggest that we needed to distinguish new, edible shoots from more mature, potentially toxic leaves and stalks. And to contrast the ripeness of red against the green of fruits not yet sweet enough. So while we may have evolved to respond to animals, we also evolved to respond to plants: to finding them and making fine distinctions among them. And further to preparing them, eventually to nurturing them as a source of steady nourishment and medicine. Our ancestors, even recent ones, had to know a great deal about plants to feed and heal themselves.

So what happened? How did we, at least those reared in western traditions, lose our sensitivity to the plant world? Urbanization? Suburbanization? Loss of small, local farms? More and more time spent indoors and on screens, in a virtual world? Badly designed cities without enough green spaces? Homogenous zoning laws that make everywhere look like everywhere else? The culturally driven idea that humans are at the top of the evolutionary ladder and plants at the bottom, therefore barely worth thinking about? Moving, generation on generation, farther away from the grandparents and great grandparents who were intimate with plants?

Yes! All of it, and more. A Worldwatch Institute study found that Americans can identify over 1,000 corporate logos on sight, but fewer than 10 plants. And yet without plants, we wouldn’t exist. Couldn’t eat, couldn’t breathe. Would never have evolved. We are entirely dependent on them. The loss of these straightforward insights is what drove Schussler’s and Wanderslee’s campaign for more education focused on plant biology.

But beyond the narrow lens of our self-interest is a broader view. Plants are our elders by hundreds of millions of years. They are full of deep wisdom and spiritual resonance. They are the primary inhabitants of the earth, both in expanse and biomass. They grew up with the earth, were formed by evolution, and further evolved all that came with and after them. They are the most crucial beings on our planet. How do we not know them?

There are certainly plant and medicine people and societies who are still deeply connected, but most children in the U.S. today don’t interact much with plants. Even children in rural areas, according to Richard Louv’s The Last Child in the Woods, are not out among plants. They are often living the same time-structured, mostly indoor, screen-bound life that city kids tend to live. My love of plants came from my earliest childhood, when I lived for five years in a green paradise that I could roam freely in. Even when we moved from there to a more typically suburban neighborhood, I was still in a place full of trees and flowers, along with small but precious wild areas, and a river nearby.

I learned the mechanics of plant biology in high school, but neither my parents nor my teachers were plant people. What mattered the most was that I was able to spend time among them at an age when their spiritual nature made perfect sense to me. I couldn’t have put this into words then, of course, but I knew I was alive among beings that were not only friends and family but were taking me in hand, telling me their deep truths about our profound connections.

We live in a world already close to 60% urbanized, and rapidly becoming more so.  80% of the U.S. population lives in metropolitan areas. So we may not be able to offer many children the opportunities I had. But we can certainly do infinitely better than we are now, both in the classroom and, even more important, outside of it. According to Louv’s studies, many of the things we say we value — mental and physical health, the ability to concentrate, to learn, to cooperate — are fostered when both children and adults have access to nature. He named our plight ‘nature deficit disorder’, an epidemic that flies below the radar because so few people are aware that they’re suffering from it.

The oldest Homo sapien fossils are 300,000 years old. We only began clustering into cities and towns 10,000 years ago. Until well into the 20th century, most people still lived in small villages and rural areas. So for 99.9% of the time since we evolved, we were immersed in the green breathing of plants. They formed us. Literally in the nourishing of our bodies and large brains. And also more deeply: our psyches and souls were created by constant interaction with the natural world. We were not designed for the choices we’ve been making.

Right now we face equally great challenges and opportunities. Climate change and species loss require us to green our world as quickly as possible. That means preserving the vast areas of forests and savannas that still exist, but it also means bringing more green closer to home. Re-greening our cities and suburbs. Knitting together biodiversity corridors with our gardens and parks. Creating green roofs and green walls. Planting streets and meridians with appropriate plants. As we face redesigning our cities for a low carbon future we will have many chances to create green space as long as we’re not too plant blind to seize the moment. It’s a huge job, but also an exciting and ultimately beautiful one.

Schussler’s and Wandersee’s plant blindness campaign aimed largely at expanding botanical education. But they also made a simple and rather heartwarming suggestion: become a plant mentor. Children who have people in their lives connected to plants become connected themselves. Children who grow up knowing the green world are our future environmentalists. If my own young relatives are anything to go by, as soon as you start talking about plants they become curious. It’s as if you’ve switched on a current, opened the channel to the long years of plant immersion we are descended from. We carry that deep knowledge in our bones and souls. It’s there to be reawakened. It’s longing to be reawakened.