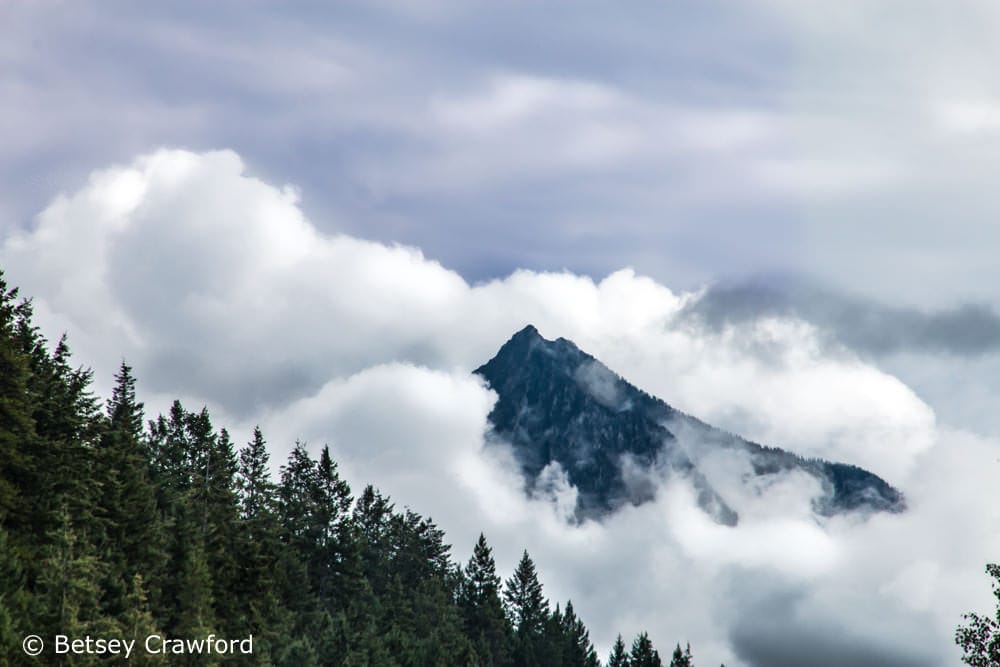 When you look at the mountain above, your reaction is likely to be colored by what is most important to you. Skiers may think of the thrill of the trip down, climbers of the trek up. A mining executive of the coal or metals to be found there. A road engineer of the challenge of finding a way through. A photographer of the play of light and dark, soft and hard, mist and mystery. A conservationist or ecologist ponders the preservation of majesty, ecosystems, and access for everyone. Someone steeped in indigenous thinking sees brothers, grandmothers, cousins in the interplay of beings.

The last two ways of seeing are coalescing into a relatively new movement called the Rights of Nature. In 2008, as a result of dedicated activism, Ecuador became the first country in the world to enshrine such rights into its constitution, stating that “Nature, or Pachamama, where life is reproduced and exists, has the right to exist, persist, and maintain and regenerate its vital cycles, structure, functions and its evolutionary processes.” Well-being, defined with both the Spanish buen vivir and the Quechua sumak kawsay, calls for the human community to “enjoy their rights, and exercise responsibilities within the framework of interculturality, respect for their diversity and harmonious cohabitation with nature.”

In our corporation-dominant, consumption-obsessed economy, this is virtually a laughable concept, even for some who care deeply about the earth. The idea that the mountain is a being, that the rocks that form it, the plants that flank it, the rivers that fall in cascades off its edges are entities who deserve the life, liberty, and pursuit of happiness that we wish for ourselves is inconceivable for many and a steep climb for most. Even with those provisions in their constitution, the indigenous peoples of the Amazon rainforest in Ecuador are still fighting an uphill battle against the mining industries, supported by the government, that want to move into their territories.

We have largely thought of rights as belonging to humans, either as individuals or groups, like states and corporations. The earth is seen not as something we are part of, but something we own, a vessel for human activities, a source of products and income. If the mountain is destroyed by, say, blowing its top off to get at its coal, that has so far been regarded as the cost of doing business, not just for the coal company, but for all the people relying on coal to fuel their own industries and salaries. In its present form, most of the world economy depends on the exploitation of a planet that only produces so much clean water, fresh air, rich soil, and biological gain in any given cycle. In our persistent overconsumption of these blessings and the destruction of the ecological systems that produce them, we are robbing the rest of the beings we share the planet with, as well as our own future as a species.

Our current economic model prompts us to think of the earth in terms of its perceived value. A field growing ‘nothing’ but grasses and flowers is a ‘wasteland.’ Restrictions a town places on what can be done with certain parcels of land ‘reduce the value of the property.’ Wetlands, one of the most important of our ecological biomes, are pointless from a development point of view, ripe for filling in for buildable land. Wetlands provide, among many other things, the first line of defense against flooding. But though the line from a filled-in wetland to the costs of rebuilding after a flood is a straight one, it is obscured by other perceptions. Few people trying to rebuild their lives after a devastating flood have the energy to spare for the wetlands that should have been preserved to prevent the loss in the first place. The original developers would likely have been incensed had they been expected to respect the rights of the wetland to “live out its vital cycles” free of landfill.

In a world where we struggle to grant people who don’t look or think like us the same rights that we want, what hope is there that we will grant a field of wildflowers a right to live its vital cycles without becoming a parking lot? Yet the rights of nature are intimately tied to the rights of human beings. A series of dams in Brazil is displacing tens of thousands of indigenous people in the Amazon basin. The climate changes from our carbon dioxide-saturated atmosphere are forcing Pacific island communities to leave their flooding homelands while a worldwide backlash against refugees rages. Forced development of lands sacred to indigenous peoples rob those communities not just of their place, but their history and culture, the way they define themselves. Dumping of toxic waste in poor communities because richer ones refuse it causes sickness to skyrocket in those areas. The list is endless.

There are environmental laws worldwide, and in some cases and places they are very strict in protecting endangered ecosystems, plants and animals, and in preventing further damage. But, as we are seeing every day, these laws can be dismissed by the next administration, something that happens from the local to federal levels. It’s not just now, either. Cycles of strengthening and weakening the Environmental Protection Agency — along with other protective authorities and laws — have been a feature of political life since it was created in 1972.

If instead, we recognize that nature has rights on her own, their defense changes dramatically. A river, a forest, a panther, an owl, the atmosphere would then have ‘standing’ in court, the ability for a guardian or group to sue on behalf of the entity itself. Without inherent rights, the only people who have standing to sue on behalf of nature are those who are potentially or actively damaged by a policy or an infraction of a law. In practice, this often means that the case is stronger the more damage that has already been done.

Needless to say, this is an enormous challenge, one that I’m looking forward to exploring. It’s a different way of thinking for the many of us caught up in our current economic and human-centric mode of being. Changing perceptions about life on our planet, and our place in it may well be the most formidable of the obstacles we face. If we can move toward seeing ourselves as an intimate part of the web of life, one member among millions of beings and entities, forming a whole that we are completely dependent on, our relationship to the earth and everything that forms it changes. We can then focus our extraordinary ingenuity on what Thomas Berry called The Great Work: creating a world where the human presence fosters and enhances the earth that forms and sustains us.

14 thoughts on “Rights of nature”