In my favorite creation story the world is sung into existence. I first came across this wonderful idea as a child, in one of C.S. Lewis’s Narnia books, ‘The Magician’s Nephew’, where he has his divine embodiment, Aslan the lion, slowly move across a pitch-black and featureless void, singing first the stars into the darkness, then the sun, and then on to all the details of the world we love.

Polly was finding the song more and more interesting because she thought she was beginning to see the connection between the music and the things that were happening. When a line of dark firs sprang up on a ridge about a hundred yards away she felt that they were connected with a series of deep, prolonged notes which the Lion had sung a second before. And when he burst into a rapid series of higher notes she was not surprised to see primroses suddenly appearing in every direction.

All these decades later I can still feel Polly’s ‘unspeakable thrill’ at the thought of Aslan’s ‘gentle, rippling music’ sending waves of green up the hills he had just sung into existence. While the rest of his creation story is straight out of Genesis, Lewis knew the world’s myths, and perhaps took the singing from its originators, the aboriginal peoples of Australia. This retelling is from Sara Maitland’s ‘A Book of Silence’:

In the beginning is the land — flat, dark and featureless — until the ancestors went traveling the paths of it. As they travelled they were creating the mountains and the hills and the rocks and the animals, people, places. They did not do it once and for all, they do it still. The paths must be walked. The creation work must be done; the land is forever and the creating of it is forever. The dreaming, singing, dancing, walking goes on and on, forever.

The ancestors included humans, landscape features, and the first of certain totem animals, who gathered themselves together from primordial mud and proceeded to sing the rest of the earth into existence. To me, this creation story has the keenest intuition into the actual processes that formed the earth — the earliest floating particles and gasses that gravity pulled slowly together into a swirling mass. The billions of years of coalescing, exploding, hardening, cooling. The pushing up of gigantic mountains. The coming and going of vast silent seas. The slow emergence of plants and animals. The millions-of-years-long evolution of human beings.

All this time the ancestors were singing, breathing, dancing the world into form, the landscape into rivers, forests, rocks, flowers, canyons, people, animals, birds, sky, clouds. These songs and stories created songlines, maps to the Australian landscape. If you know them, you can find your way, landmark by landmark, along the line you’re following, through trackless desert, along the ridges of mountains, finding water in the valleys, seeing the quicksand to walk around.

The best part is that, fired by the same forces that shaped us in the first place, we are still singing the earth into creation. The dreaming, singing, dancing, walking goes on and on. What a wonderful task to be given: to sing of all we touch, each person we speak to, every place we visit, everything that opens our hearts. To spin songlines every day of our lives. 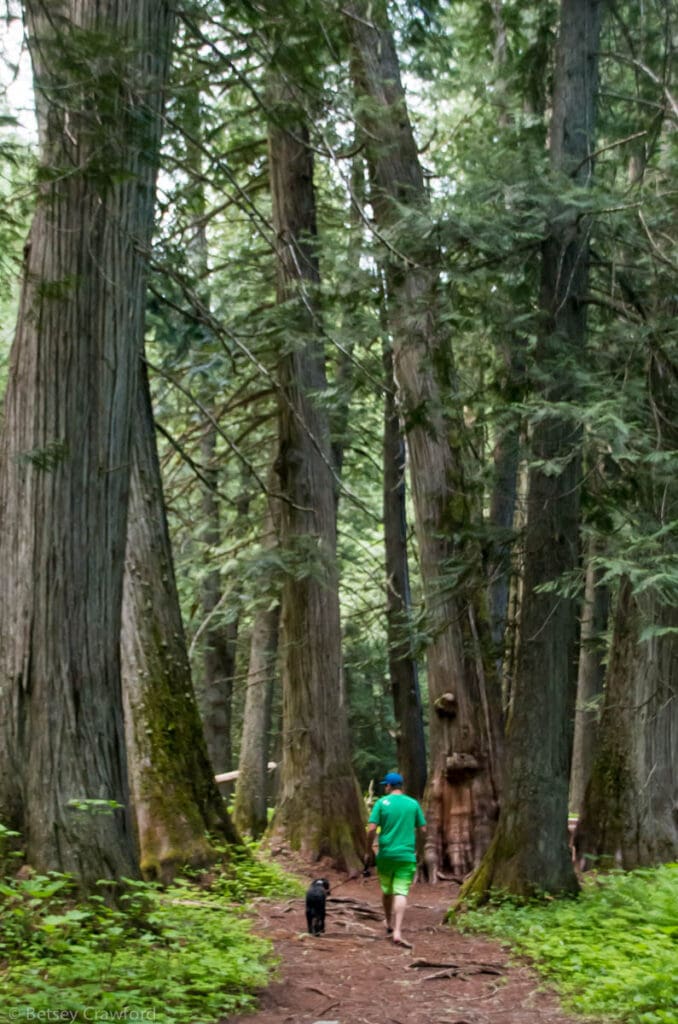 The paths must be walked. The photos accompanying this post are from such a singing, along such paths: going with my son, Luke, and my dog, Splash, to Settlers Grove of Ancient Cedars near Murray, Idaho. An echo of deep time: the oldest tree there was a seedling in 900 CE.

When I was last in Coeur d’Alene, my friend, Marie Cecile, said something that I took as a beautiful blessing — that as I go from place to place, I’m not only bringing my own energy to that place, but I’m also taking the energy of that place with me, and bringing it to the next place, and so composing an interwoven network. Her words inspired me to create the map of my song lines since leaving on our adventures in 2011. Warm color lines brought us west and south, cool colors north and east. This summer I will be adding brand new ones, tying nature to spirit.

As I travel these lines I sing of wildflowers, and my love for beauty, for my family and friends, my love for the green sighing of the forests and prairies, the gray mists of the coasts, the hot breath of the deserts, the prickly cacti flaunting their gorgeous, silky flowers, the tiny shooting stars nestled in damp woods. I sing as I walk, as I meet people, as I take pictures. We all do this, singing of the life we love, of the things we’ve lost, the joys we long for, paying attention, bringing life to life, our songlines floating out behind us, like spider’s silk, both gossamer and resilient, reeling from our hearts.