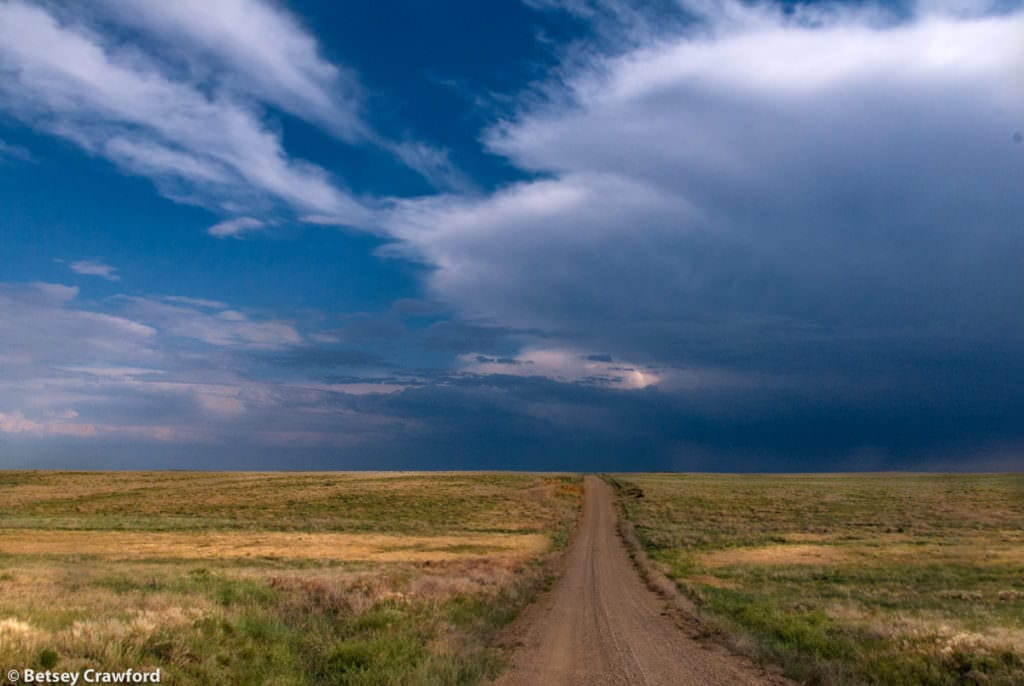 The Pawnee National Grasslands were born out of grief. After years of drought, farmers of northeastern Colorado, already suffering through the Great Depression, watched as their soil literally blew away. Clouds of dirt rose 20,000 feet in the air and blew so far east that they eventually settled on boats crossing the Atlantic Ocean. Left with nothing, many farmers were happy to sell their land to the U.S. government and move elsewhere. Some people weathered the storms, and by changing the way they used the land, their descendants still own their farms, creating a patchwork of private, state and federally owned property throughout the preserve.

The Grasslands were also born out of redeemed hubris. In 1875 John Wesley Powell, explorer and director of the U.S. Geological Survey, submitted a report on the land of northeast Colorado, saying that the area was not suitable for farming. The average rainfall was 12 to 15 inches, mostly in the spring, the summers were hot, and there was a continual drying wind. It was pointless to plow with the hope of growing crops. Instead, he said, it should be left in grass, for grazing.

For 11,000 years, until the European settlers came, the indigenous peoples had come and gone, migrating away during hot, dry eras, and returning as the weather got cooler and wetter. They hunted the large beasts that grazed the land, including mammoths and the ancestors of modern bison. By the mid-1800s, the grasslands were home to 60 million buffalo, sacred to the tribes for whom they were food, clothing, housing, and spirit.

In the 1700s the first Europeans came, explorers and fur traders. The rush didn’t come until the gold was discovered near Pikes Peak in 1858, and the first Homestead Act in 1862, which gave every man or woman 160 acres as long as 40 of those acres were plowed and planted in five years. The railroad pushed through at the same time, bringing more people, as well as the supplies to build their homes, stores, and schools.

The buffalo were first slaughtered to feed the train crews. And then they were annihilated to kill the spirit of the native tribes, at that point Arapaho and Cheyenne, who were forced off the land they had lived on compatibly for millennia. Heedless of Powell’s warnings, the newcomers tried to farm the land. In the few years when there was enough water, that worked. But in the many years of drought, people moved on, leaving the soil weakened and exposed. The grasslands depend on the deep, wide, networking roots of native grasses, evolved to live in the arid climate, to hold the soil in place. Those grasses were plowed under to grow crops that shriveled in the recurring droughts. 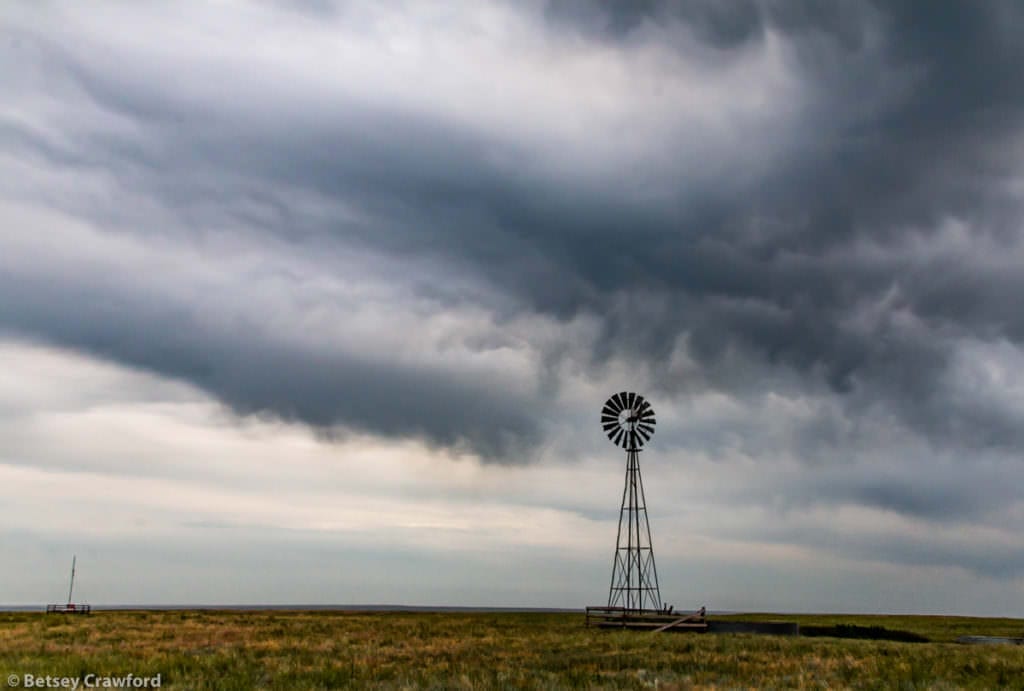 When the federal government started buying the land in the mid-1930s, it was the Soil Conservation Bureau that was in charge. The first task was to replant the bare areas with grasses, not necessarily native; anything that would grow and hold the soil in place. Almost 100 years later, the native grasses are still recovering. They had evolved together with the grazing animals: grass fed the animals, and the animals kept clipping the grass, creating both a dense mat of fresh stems that prevented the soil from drying too quickly, and the deep roots that literally held the ground in place.

So the plan was to bring the grasslands back to managed grazing, which is the dominant use today. There are some small oil and natural gas wells, and an expansive windmill farm to take advantage of the constant wind. Single windmills pump water into tubs for the grazing cattle. There is still conventional farming in the surrounding area, wherever irrigation is feasible.

I heard about the Pawnee Grasslands the way I hear about a lot of things: a chance conversation. I was in Grand Junction, clear across the state, and stopped at the visitors center to get information about the nearby Grand Mesa. The friendly volunteer I talked to asked where I was heading afterwards, and I said, ‘To the prairies.’ He told me about the grasslands, even looking it up on his computer, as if to convince me to go. So, I did. 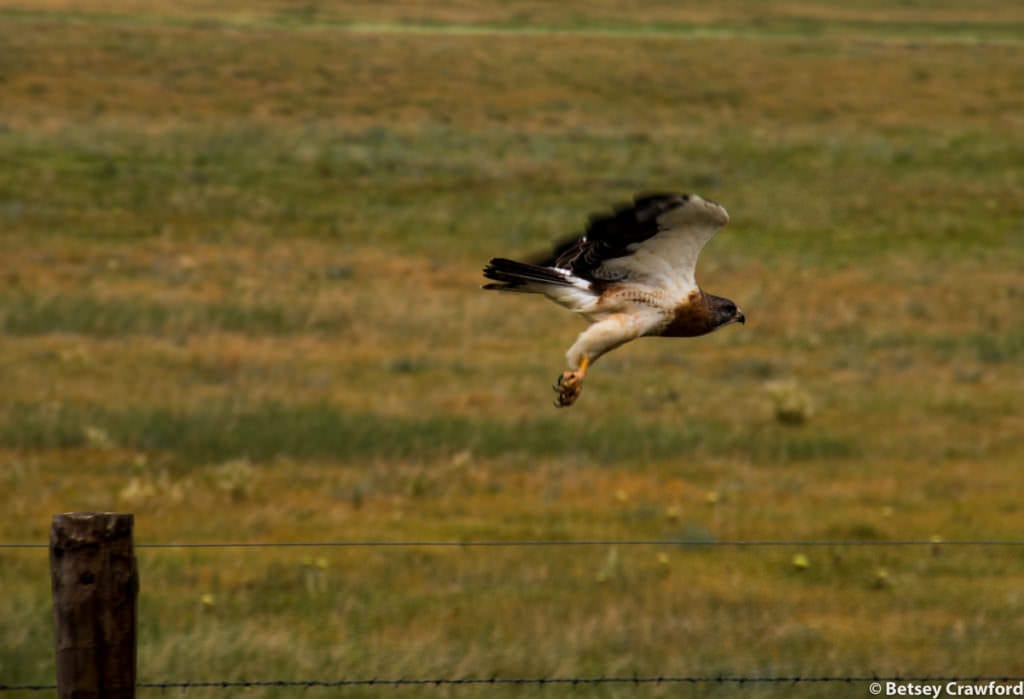 I spent three days wandering through the grid of dirt and gravel roads that mark off one-mile-square plots, and got a taste of what the prairie has to offer, starting with 100-degree heat the first day. That was a perfect time for birdwatching from the air-conditioned cab of the truck. And there are tons of birds. Three hundred species have been identified, making the Pawnee Grasslands a world-class birding site, especially during the spring and fall migrations. But even with the smaller summer crowd, it was great. Black and white lark buntings, Colorado’s state bird, were everywhere. Hawks floated overhead and took off from fence posts. Young meadowlarks startled up from the grasses along the edge of the road as I drove slowly through, landing on wire fences, looking confused, as adolescent birds often do. A loggerhead shrike joined me on the road, too briefly for a picture.

The second day was a balmy 88 degrees, and not too windy, so that was the day for flowers. There wasn’t a great variety yet, but enough to make me very happy. There were prickly poppies, new to me, along with familiar yucca, cleome and prairie coneflower. The edges of the roads were lined with tiny morning glories. That evening I drove to the Colorado Buttes, in the northeastern corner of the grassland, in the company of several pronghorn antelope. Towering 250 feet above the prairie, the buttes show you where the ground you’re standing on once was. Five million years of erosion ago, the open prairie was level with their tops.

The third day blew in on a strong, non-stop wind, reminding me of the lament of prairie settlers that the constant wind drove them mad. Flowers were rocketing back and forth on their stems, so I gave up on photographing them. I walked to a clump of trees, growing out of a creek that was invisible until you were right next to it, giving the grove a mysterious presence in the middle of the waving grasses. It was exhausting to walk two miles in that wind, so I was glad to get back to the truck and enjoy the storm clouds that were rolling in. Luckily, the wind kept them to the south, a beautifully ominous background to the still sunlit grasses.

The Pawnee Grasslands are short grass prairie. There’s not enough water for the taller grasses and flowers that grow farther east. Coming down from the grandeur of the neighboring Rocky Mountains, you might find these grasslands unexciting, even featureless, at first glance. As with other quiet worlds, it takes time, and presence, to get to the heart of their beauty. Three days gave only a taste of the vast sense of space, the subtly changing colors, the calls and songs of birds on the wing. The near invisibility of a tiny horned lizard against the stony soil. The sky as a presence, even a drama, in that profound expanse. A quiet so great it becomes an entity in itself. Even the wind — with no corners to howl around, and few branches of rustling leaves — is quiet. It moves steadily across the prairie with a rushing whisper, scattering the details of your life, leaving you as buoyant and receptive as the flowing grass. 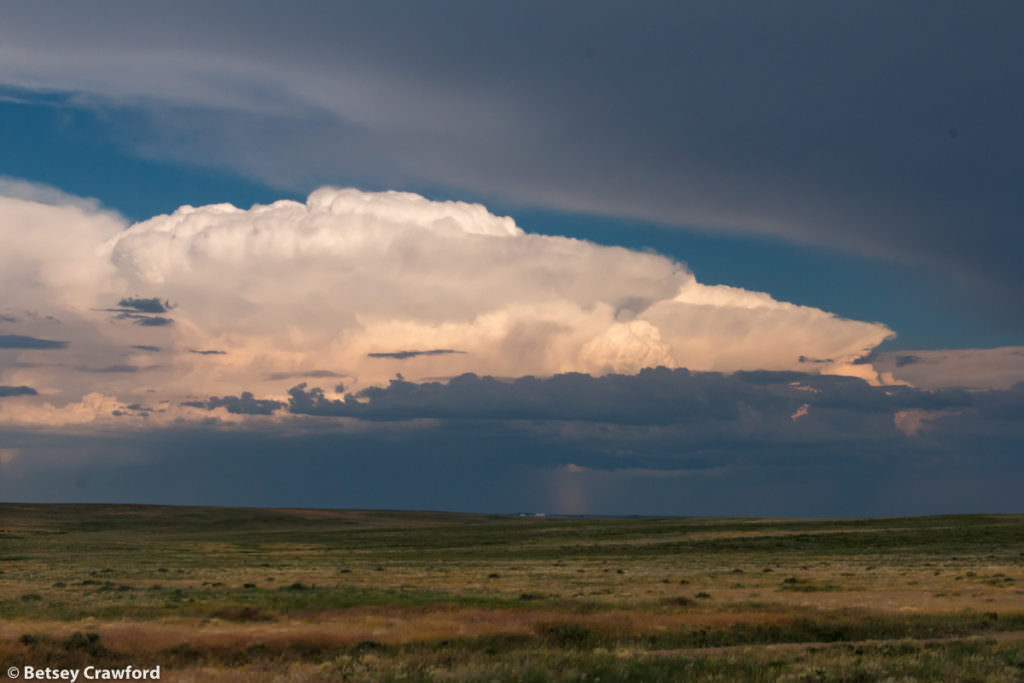 There are more pictures in the Pawnee National Grasslands gallery.

5 thoughts on “Parcels of prairie: the Pawnee National Grasslands”