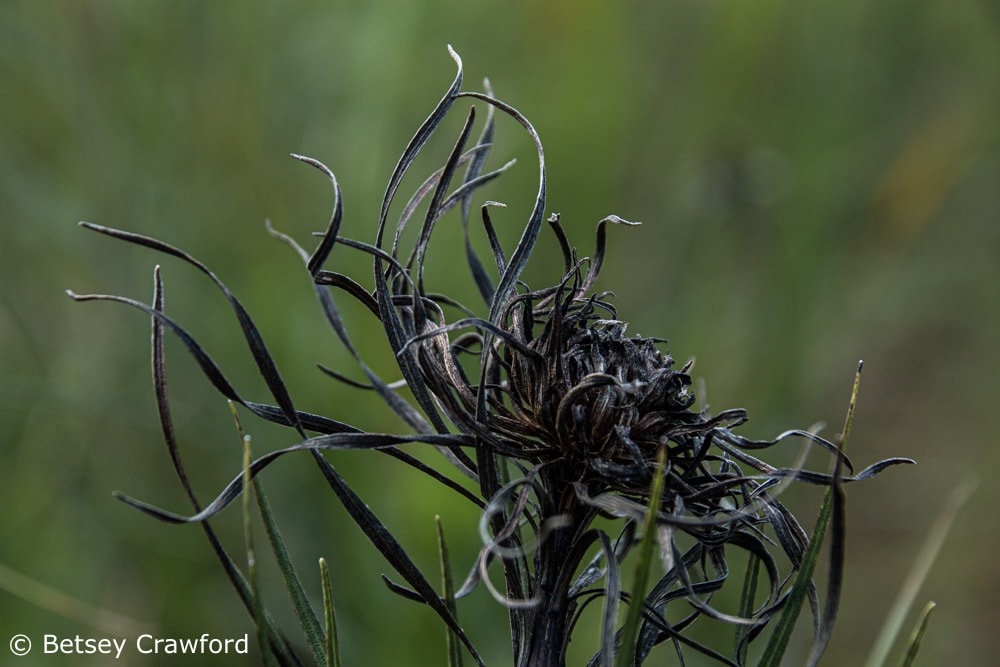 At the end of the day, it’s because there are people who are deeply committed and are fearless. And are not going to be stopped. That’s how history happens.
~ Ted Howard ~

It was seeing the black curving lines of the fading flower above that made me think occasional Halloween posts might be fun. And they are. I explored white flowers for Ghosts in the Landscape, and orange ones for Slightly Ominous, Very Orange. This year I’ve chosen flowers that have a spooky aura about them. It might be from their spikiness, their weird emergence from the earth, or their lovely, dying curves. But these are wild and difficult times, with plenty of real-life ghouls trying to take charge of our destiny. Wishing someone a happy anything can feel like a hopeless cause.

I can get as obsessed with politics as anyone. But in these essays, I prefer to focus on what the earth we emerged from has to tell us about our lives. Especially about how we might live for the sustainable prosperity of all. After the 2016 election, I wrote Sowing Seeds into the Whirlwind. There I turned to what I took comfort from — the millions of people worldwide who are working to make the world a better, fairer, saner, greener place. The blessed unrest that Paul Hawken describes in his book of that name. They are still there, and there are even more of them now, more energized than ever.

As a Sierra Club newsletter so well put it: “When it comes to dealing with [the environment] there are few obstacles to progress as great as the hot mess of greed, denial, and incompetence that is the current U.S. federal government.” Yet that was in an article about reasons for hope. Partly because the Sierra Club, along with Earthjustice and the National Resources Defense Council, has spent the last three years taking the Trump administration to court on a continuous basis. And have won almost all of the challenges that have been decided so far.

Small and nimble, the newer Community Environmental Legal Defense Fund has expanded its work in helping communities resist corporate takeovers of land and resources. This year their lawyers helped Toledo residents get personhood rights for Lake Erie. It’s “the first rights-based law in the United States that specifically acknowledges the rights of a distinct ecosystem, securing the Lake’s rights to exist, flourish, and naturally evolve.” Of course, the Ohio legislature immediately voted to outlaw such laws. But, as the organizers said, they are not going anywhere.

Post-industrial northern Ohio is also the home of the only Ph.D. program in biomimicry, design based on nature’s 3.5 billion years of research and development. People involved are hoping to turn their corner of the rust belt into the Silicon Valley of biomimicry. Cleveland, Ohio is pioneering a local and cooperative economy in a collaboration that is now called the Cleveland Model. The quote that leads this essay is from Ted Howard, the model’s founder/collaborator. He was asked why certain communities were leading the way in creating their own versions: vision, courage, commitment.

On one day in early October, California’s Governor Newsom signed six bills designed to move California beyond fossil fuels. Twenty-five states have joined the U.S. Climate Alliance, formed to keep the United States moving toward the Paris Climate Agreement goals even though the Trump administration has abandoned them. Here is a list of recent actions by, among others, New York, Michigan, Virginia, New Mexico, and Pennsylvania.

In July, Ethiopians took off from work and school and planted 350 million seedlings in one day, part of Ethiopia’s plan to plant four billion tree seedlings this year. Recognizing that reforestation is crucial in climate mitigation, the U.N. launched The Trillion Tree campaign in 2006. Over 15 billion trees have been planted, with China, India, and Ethiopia leading the way. The U.S. is number ten. Want to plant trees simply by surfing the web? There’s an app for that: Ecosia devotes 80% of its profits to planting trees.

Greta Thunberg sat alone in front of the Swedish Parliament one year ago, inspiring a steadily growing movement. In September she marched along with 4 million people across the globe who took up her call to change how we operate in the world. She’s in the good company of a fast-growing number of young climate activists, many from indigenous nations. Like Greta, they are courageously persisting despite endless, cruel, and threatening online and public harassment.

In Project Drawdown’s 100 solutions to reversing global warming, educating and empowering girls and women are numbers 6, 7, and 62. Women, who grow 80% of the food eaten in poorer parts of the world, are on the front lines of climate disruption. They suffer disproportionately from issues like loss of water and soil, gender violence, toxic environments, and land rights. In a field that too often gravitates to vaunted technical solutions, women bring practical, day-to-day needs, skills, and experience.

Collaborative efforts like the Women’s Earth and Climate Action Network are mobilizing women and resources worldwide. WECAN’s riveting agenda is a perfect explication of how addressing climate change involves engaging the full array of challenges humanity faces. These include land use, distribution, and rights; corporate control of government; the need for sustainable, living economies; biodiversity loss; food security.

Older, more traditional groups are focusing their activism on empowering young women. The venerable aid organization CARE’s top priority is educating girls. The World Association of Girl Guides and Girl Scouts has put the U.N.’s Sustainable Development Goals at the center of its mission, along with fostering girls’ leadership abilities. They even have an app for finding events to join, including group actions and demonstrations.

I could go on and on. There are so many people doing good things, and every one of them is a reason to feel hope. Desmond Tutu famously said that he is “not optimistic, no. I’m quite different. I’m hopeful. I am a prisoner of hope.” The Old Testament prophet Zecharia, whom he was quoting, promised double blessings to the prisoners of hope.

As I write this the entire county of Marin has no power. The incredibly inept Pacific Gas and Electric Company has taken this precaution because they were paying their shareholders and their executives’ bonuses instead of investing in infrastructure. Wildfires are raging north, east, and south of me, a result of super dry, windy weather patterns caused by global warming. The news is a heartbreak a headline. And yet here I sit, a prisoner of hope. I don’t know if we will have the imagination and will to overcome the challenges we’ve created in my lifetime. But I know that whenever we do overcome them, it will be because we have expanded our vision of what the human presence on this planet means. And our vision of who the stakeholders really are.

Once women and people of color are at the table, they will not go back. Once indigenous nations are at the table, they will not go back. When farmers have rights to their land and their seeds, they will not lightly cede them to agribusiness. As soon as the first state, the first country leaves fossil fuels and all their damage behind, the dominoes will fall. One river with rights means there will be other rivers with rights, as indeed there are. Educated girls will become empowered women. If you listen carefully in California during this “public safety power shut off,” I bet you’ll hear the word microgrid everywhere you go. Smaller, local, renewable, sustainable energy production. The old paradigms can’t meet the moment their structures have created.

Will it happen in time? We don’t know. We don’t even know what time is. Our scale is so different, our story so small. The planet herself is taking over. Not to protect herself from us, but because she is us. This is where I draw both hope and optimism — in the millions of people who are hearing her call. Who are allowing her energy to become theirs. “Our origins,” Rachel Carson wrote, “are of the earth. And so there is in us a deeply seated response to the natural universe, which is part of our humanity.” Deep down we know. We have been blind and we have been oh, so slow. But we can feel the earth that formed us now rising in us.

So, I do wish you a happy Halloween, with love, hope, and spooky beauty.