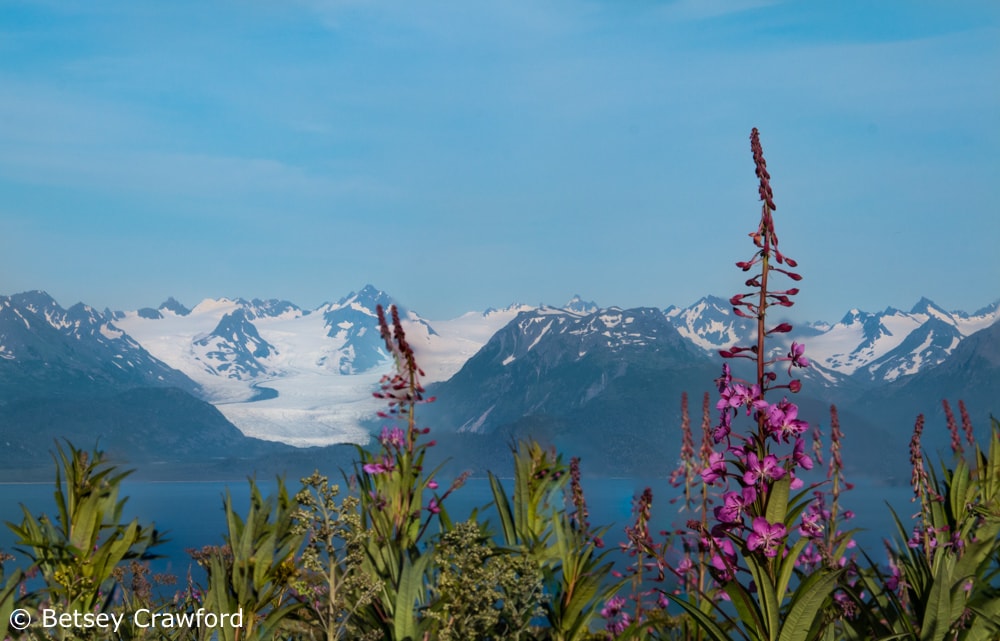 If my passion were for fishing, or climbing mountains, or volcanoes, or glaciers, or mighty rivers, or wildlife, or liquid carbon geology, I might have chosen a different icon: salmon, Denali, Mt. Redoubt, the Matanuska Glacier, the Yukon River, the grizzly bear, the moose, the bald eagle, or even the Alaska pipeline. But, though I treasure many of them, not only is my passion for wildflowers, but all of those other icons never seem to appear, in summer, without fireweed somewhere in the picture. So, it’s my icon.

It’s the flower of summer, and it’s literally everywhere. It can match my height in the temperate rain forest, or cap out at less than a foot in the alpine tundra. The roadsides are magenta, open meadows are filled with it, the views of mountains and glaciers are seen through the tall, many-flowered racemes, dark green spruce forests form the backdrop of vast stands of it.

Fireweed is beautiful, sturdy, prolific, and always up to something. The new shoots can be eaten like asparagus. The leaves can be dried for tea. The flowers bloom over a long time, slowly opening from the lower stem to the tip. The first thing a local resident told me when I arrived in Valdez is that summer is over when the bloom gets to the top. While blooming, they make bees, butterflies, moths, and hummingbirds very happy. According to a beekeeper, fireweed bees produce a white honey. Farmers’ markets sell pink fireweed jam.

As they bloom and fade, the ovaries under the petals continue to grow into long, slender pods, filled with so many seeds an individual plant can produce as much as 80,000. The pods continue the color scheme, sometimes almost as vivid as the flowers.

After a point, while flowers are still opening above them, the pods begin to split open, curving away from a slender, erect center, into four thin bracts, and 300 to 500 seeds from each pod start to float through the air. Once open, the curving bracts continue to encircle each other. As they dry, the color becomes gold in the sunlight. The leaves turn a bright, deep red, a memory of the vivid summer color still lingering on the roadsides as the flowers disappear completely.

Eventually all those seeds land somewhere, and wait. If on open meadows or disturbed roadsides, they can germinate the next spring and bloom by their second year. If in the forest, they wait on nature. At some point, fire sweeps through, and, without the tree tops blocking their sun, or the roots taking all the water, fireweed is the first flower to burst into bloom, which is where it gets its name. It isn’t just fire —  it was the first plant to blossom in bomb craters in London in WWII, will take over a roadside immediately after the surfacing crews have left, and fills the swales of housing developments if it isn’t mowed down. Once established, the roots create rhizomes, spreading mat-like through the soil, forming a strong network of plants.

So, it was a constant thrill. And now my truck is filled with these seeds. I picked a split pod one day and was intrigued to see clearly, for the first time, that slender center ‘pole’, and wondered if that tiny surface held all those hundreds of seeds, with their attendant feathery hairs caught by the four bracts as they curved away, pulling the seeds with them. Testing this further, I picked three pods that were just splitting open at the top, to see if I could catch this magic in the act. I put them on the dashboard, planning to take them back to the trailer and watch them.

A short time later I realized they had all burst wide open, right there on the dashboard, and the seeds were beginning to float around. They floated the whole day, showing a particular affinity for George, who had to keep blowing them away. I was utterly delighted. The next day, when I got into the truck, not a single feather was to be seen anywhere. Even the curling bracts had disappeared from the dashboard, though I later found one on the floor. Some of the seeds must have gone out the window on the trip, or the door when we got out, but the rest — hundreds of them — are still in there. So I have this vision of the truck, after many years of service, being put out to pasture, doors open, letting in sun, rain, dirt slowly accumulating, and all those fireweed seeds springing to life.

7 thoughts on “The Alaska icon: fireweed”