The dream shapes the world, the Achuar people told John Perkins on his visits to the Ecuadorian rainforest that forms the headwaters of the great Amazon River. They asked for his help to protect their sacred land — the heart and lungs of the planet — from the dream of the west, with its insatiable hunger for the oil under their feet. John, no stranger to either the depredations of global corporations or the shamanism of the Amazon forests, was pondering this request when he took a group of activists to Guatemala to meet with indigenous people there. Lynne Twist was part of the group. Their experiences included meeting a shaman, who led them into a ritual dream state.

Lynne dreamed she was a bird, flying over a dense, vividly green forest. Faces with geometric markings and crowns of red and yellow feathers floated above the trees. Back in California, enmeshed as ever in her passionate, decades-long work on world hunger, the images were so persistent they began to interfere with her life. She called John for guidance. He told her that the markings and crowns were the tradition of the Shuar people he had worked with for many years, and the more isolated Achuar people who had recently invited him to help them.

We must change the dream of the modern world, they told John over and over. It is urgent. The dream of a ‘progress’ that destroys the earth, that robs the future, that leaves billions of people — half the world’s population — with less than two dollars a day. They talked of the ancient Mayan prophecy of the condor, the heart, and the eagle, the head. It foretold the arrival of the eagle people at the end of the fifteenth century. It prophesied five hundred years of strife. Now, it was time for the eagle and condor to fly together.

John and Lynne took another group of activists back to the rainforest to meet with the elusive Achuar. With Lynne’s husband Bill as the third founder, the Pachamama Alliance was born, named with the Quechua word for Mother Earth. The Alliance, which now includes several other indigenous groups in the Amazon headwaters, is dedicated to ‘bringing forth an environmentally sustainable, spiritually fulfilling, socially just human presence on this planet.’

The title of this essay, the second in a series, is taken from Paul Hawken’s book Blessed Unrest: How the Largest Social Movement in History Is Restoring Grace, Justice, and Beauty to the World. Paul talks about the idea that these millions of people and groups are being called to action by the earth itself, her immune system at work. The Pachamama Alliance is a perfect example. People in one of the earth’s remotest areas put out a call for help. They find someone who is dedicating his life to saving the planet. Once an economic hit man himself, he knows what they are up against. He, in turn, is connected with someone who is receiving messages that are mysterious to her until he recognizes them. This is the soul of the earth in action, the rainforest sending out a new dream, gathering her helpers.

Bill and Lynne, called from other endeavors, had no idea where to start, so they did the simplest thing: they listened. The sophisticated, deeply spiritual, fiercely courageous Achuar didn’t need help with their own lives and traditions. In order to protect those, and the sacred lands they and the rest of the world depend on, they needed help with the things of the west. They needed legal title to their vast lands, sustainable ecotourism to provide an alternative to selling land for oil or mining money, collaborative governing associations to organize their work and negotiate with the world. They needed maps and lawyers, solar-powered radio communication, computers and the skill to use them. They needed help formalizing their language so that educational materials could be written in it, keeping the language alive for the coming generations.

By listening and responding, the Pachamama Alliance pioneered what has become the most effective strategy for preserving wild lands: working with the indigenous people whose places they are. Now organizations all over the world are following suit. This is one of many reasons to celebrate the Pachamama Alliance at any time. I’m doing so now to follow my previous post, Rights of Nature, because the Alliance was instrumental in getting such rights into the Ecuadorian constitution in 2008. By then they had been working in Ecuador for ten years. The concept of the rights of nature was coming increasingly to the fore. Ecuador was writing a new constitution.

The Pachamama Alliance is small, with revenue and expenditures of a few million dollars, in contrast to giants like The Nature Conservancy, with a billion-dollar budget. Their size makes them nimble, able to respond quickly to circumstances and inspiration. Fired with the dream of getting rights of nature into the first national constitution in the world, Bill and Lynne moved to Ecuador and swung into action, organizing the indigenous governing bodies, hiring lawyers, firing up a publicity campaign. Other groups promptly joined them. In eighteen months, a nanosecond in governance time, nature’s rights were constitutionally enshrined for the first time.

This didn’t happen without repercussions. As we see daily in our country, there are many forces fighting the new dream. In Central and South America, leaders who have tried to protect the resources of their lands and their people from multinational corporations have fared very badly, and so did then-President Correa. He was not, like a predecessor,  assassinated. But a coup attempt created the effect the corporations wanted: he backed down from protecting his own people. The Fundacion Pachamama, the sister organization in Ecuador, was forcibly closed down, although the U.S. team was allowed to operate. A new president permitted the Fundacion to reopen last year, but the fight against oil and other extractive industries — and their political support — is constant. 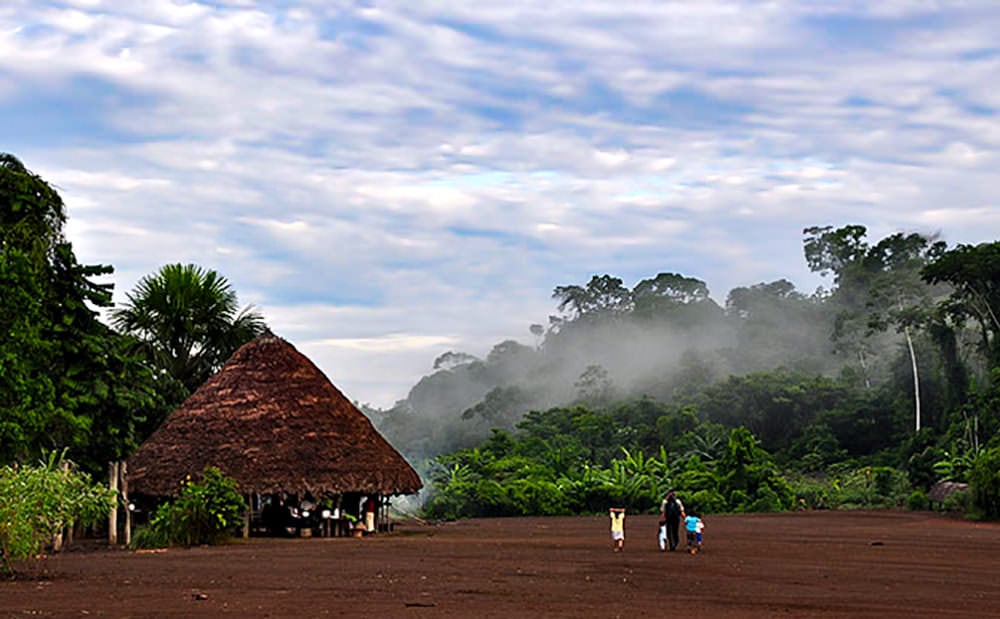 So it is a monumental achievement that, twenty years into work on the dream, the Achuar and their neighbors have not lost any land to these corporations. Now, the Pachamama Alliance is fired up to go further. Their Amazon Sacred Headquarters Initiative is designed to create a ‘globally recognized and protected bio-cultural sanctuary for the future of all life.’ It will be governed by the local indigenous people, according to their own vision, for the well-being of the entire world. Sixty million acres of the most biodiverse land on the planet, holding more tree species in one acre than in all of the US and Canada combined. The largest source of fresh water; the largest source of atmospheric moisture; the stabilizer of the earth’s climate; the spiritual home to ancient peoples. Again, the Alliance’s size and agility make it possible to go first, with seed money, enthusiasm, and inspiration. Later, the large organizations will help with the hundreds of millions of dollars it will take to bring this dream into being.

While all this has been going on, the Pachamama Alliance has never forgotten the other part of the rainforest’s call: change the dream of the developed world. Without that change, the forces that are already destroying other areas of the rainforest will be unstoppable. My first connection to the Alliance was ten years ago, when I participated in one of their Awakening the Dreamer programs. By the time I took it the information presented wasn’t new to me, but the day itself is unforgettable: a large group of people in a Unitarian Church hall, strangers in the morning, friends by lunch, companions on the journey to a new future by the end of the afternoon. Hundreds of thousands of people in 78 countries have attended these in 16 languages, and then gone on to create Pachamama Communities, and to participate in the eight-week, online Game Changer Intensive. I’m Facebook friends with a woman in Colombia as a result of one of those. I’m now involved in the newest educational program, the Drawdown Initiative, about which I’ll be writing soon.

Pachamama Alliance Journeys have taken people to the rainforest several times a year since the beginning, and are now including trips to indigenous New Mexico. Every journeyer I’ve met has told me, usually with awe, that they came back transformed. All the programs are designed to help change how we see ourselves and our role in the world, to inspire agency, to provide us with companions, inspiration, energy. And enthusiasm, which abounds. ‘The Pachamama Alliance,’ Lynne said last fall, ‘is a sanctuary for people who are up to something, a place of grace, commitment, intention, power, and most of all, love.’

In heeding the rainforest’s message to reach out and collaborate, the Achuar dream changed, too. Once fiercely isolationist and defensive, given a wide berth by their neighbors, they have taken their formidable warrior energies and become leaders in a larger, cooperative movement. At first, as was their tradition, this work was done by the men. One day, eighteen years ago, a young Shuar woman showed up at a Pachamama Alliance training on legal rights. Such a thing had never happened. She took her seat at the table and stayed there.

Narcisa Mashienta went on to co-create the Jungle Mamas program with the Alliance. There was a high maternal and infant mortality rate, along with a great deal of suffering in childbirth among the Achuar, and she felt called to address it. By working with both the men and women of the communities, they were able to respect the traditions they found, and also to introduce safer practices. They trained local women to be Maternal Health Promoters in village after village, flying into remote areas and sometimes walking as much as eight hours from the landing strip.

As happens when women are supported, they, in turn, offer others support, and the whole community feels increasingly empowered. In the Achuar language the Jungle Mamas are Ikiama Nukuri, “Women as Keepers of the Forest.” As the water carriers, the primary food producers, the bearers of the next generation, women are the generative souls of the earth. Now many have taken prominent places in the movement to save their land.

Narcisa spoke those words at the Pachamama Alliance luncheon this past fall. She was among the most unforgettable moments of the afternoon, but not the only one. Over and over I was struck by something I’d never seen before at such a gathering: the people on stage — Bill, Lynne, John, most of the staff members who spoke, the fundraising coordinator — were all moved to tears by their descriptions of the work they were doing and the people they were doing it with. Immensely touched, I afterward thought about the world we could create if this became the message we offer our children. Choose a path that will bring you to tears by its grace, its commitment, its love. Choose a dream that knows everything is alive and deeply interconnected. Choose a dream that includes every being on the planet. Choose the dream of the earth.