In the middle of the 19th century, the tallgrass prairie covered 170 million square miles. It stretched from Canada to Texas, and from the middle of Nebraska to an outpost in northern Ohio. The vast ocean of gigantic grasses was the first thing people coming west saw, as the mountains and forests of the east receded. Early explorers spoke of grasses so tall and dense you couldn’t see a man on a horse once he was among them. A marvelous ecosystem of hundreds of native plant species, with roots extending up to 15’ into the ground, it supported hundreds of species of wildlife, from the vast buffalo and elk herds to the burrowing voles and coyotes, to the birds eating seeds from the tops of grasses and flowers, to the fungi, insects and unicellular bacteria helping the grasses break down nutrients in the soil.

One hundred and fifty years later, only 4% of all that teeming, vibrant life survives, and most of that lies in the middle of Kansas, in the Flint Hills, saved from destruction by the rocks which made it too difficult to plow. A soil layer that can be as thin as 6” sits on layers of limestone and harder shale, remnants of an ancient inland sea. Without plowing, the soil remained structurally intact, so the deep roots, finding their patient way through the shelf of porous limestone — with all their attendant microbes, fungi, worms, and centipedes — could find water and anchor the prairie in place.

Instead of farming, the Flint Hills settlers chose to graze their animals on the nutritious grasses. They thus mimicked the long evolution of the prairie, which became what it was because of grazers, going all the way back to the wooly mammoth 1.8 million years ago. The animals evolved to survive by constantly clipping the nutritious grass, moving onto the next good patch as one was shorn. The grass evolved to tuck its growth points just under the soil, below the grazers’ teeth, allowing it to continually send up new shoots and thrive.

The prairie also evolved with fire. At first the random but persistent fires caused by lightning, and then the intentional fires used by the Native American grassland tribes to renew the prairie, create open spaces to live, and lure animals to the hunt with new, easy-to-eat and highly nutritious grass. Fire removes the woody growth that would become shrubs and trees, as well as the layer of decaying plant matter on top of the soil. Air and light can then easily reach the crowns of the living plants. The tribes were flexible and adaptive over their long history on the plains, leaving an area during drought, returning with increasing rains, never exhausting one place.

The settlers came to stay, and their very staying changed the nature of the prairie. Where they could plow, the prairie was altered irrevocably. Houses, barns, crops, and eventually towns had to be protected from fire, so trees and shrubs got a foothold and grew. Some of the richest soil in the world, undergirding a complex and vital ecosystem, formed over tens of thousands of years, was plowed for crops, which flourished in the wetter years. Dry years drove waves of emigration farther west, leaving soils to wash or blow away, the lean remainder prey to invasive seeds. The Native Americans, first banished to Kansas, soon were forced further west, into limited, less desirable spaces.

It’s a complex history in every dimension — botanical, geological, human — some fascinating, some heartbreaking. Today there are two main preserves in the Flint Hills. The 8,600 acre Konza Prairie Biological Station lies just south of Manhattan, owned and operated jointly by the Nature Conservancy and Kansas State University. The 11,000 acre Tallgrass Prairie National Preserve is an hour further south, and is part of the National Park Service, also in partnership with The Nature Conservancy. Both are studying how to conserve and manage the prairie, and both are working with private landowners to help manage the prairies they own in the Flint Hills.

The Nature Conservancy has been very active in this, even working to obtain liability insurance for prescribed burns, so that homeowners will be more confident about trying them. Both preserves are working on best practices for an array of desired results. What’s good for the sloping soil next to a stream, which provides enough water for trees, is different from the approach that benefits grassy areas on the top of dry, windy bluffs. Above is an experimental design for burning and grazing rotations, for both cattle and bison at the Konza Preserve. Below is the actual burn plan for 2016. 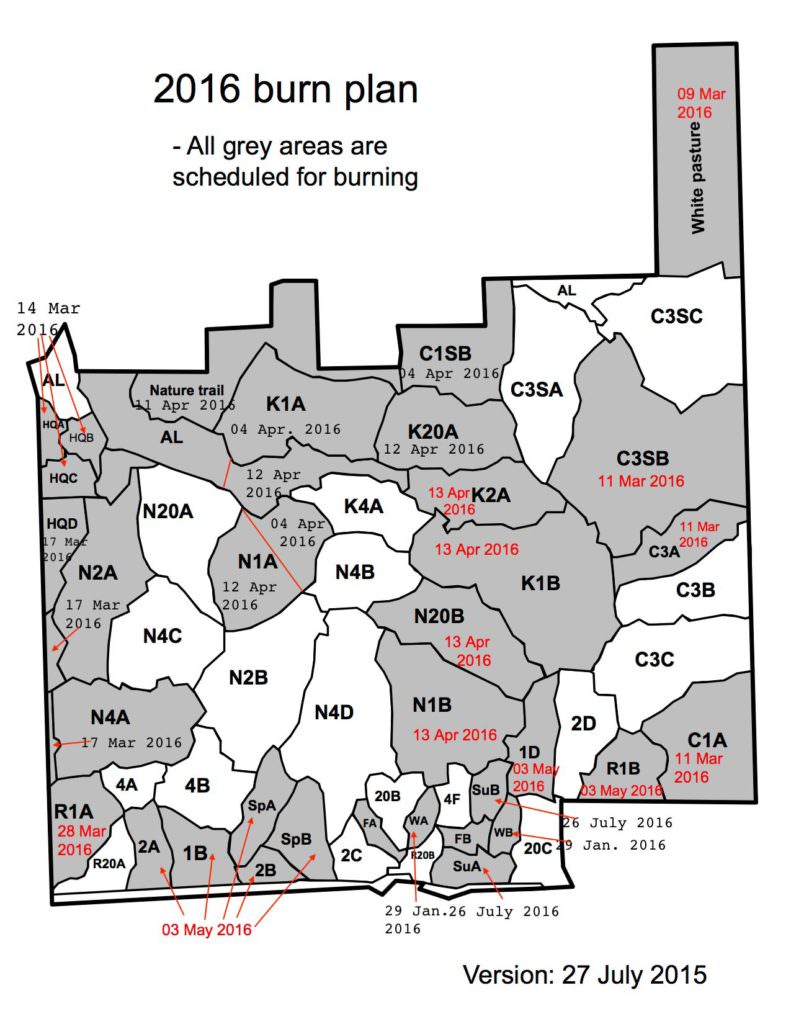 Not burning for as much as 20 years will allow trees to grow, and then clearing and fire will remove shrubby growth to create an open savannah. Burning as frequently as every year will create a lot of blooming flowers, but makes it hard for ground nesting birds. So areas are divided and burned in rotation. Neither burning nor grazing is a clean sweep of the prairie, and the remaining patchiness makes for varied areas of mixed diversity. Increased plant diversity leads to increased animal diversity.

It’s a beautiful cycle, but it’s not endless. The only thing that keeps tallgrass prairie going at this point are the actions of groups like The Nature Conservancy, the Park Service, state conservation departments, and a multitude of smaller, local organizations. Plus the willingness of prairie-loving owners to keep the forces of evolution alive on their property. There are many people like me, who mourn the loss of a vast grassland that could swallow up a horse and rider, even though we have never been privileged to see such a thing. Those billions of stalks fell to a philosophy that rules much of our world at this point — that the earth is here to serve us, and everything is for our use. The tallgrass prairie is now corn, milo, sorghum, soybean and wheat fields stretching to the horizon. It’s feedlots and silos, Main Streets and huge box stores in a barren desert of asphalt, skyscrapers and four-lane highways.

I shop in stores and drive on highways, and enjoy many things towns and cities have to offer. I eat the abundance farms provide and depend on the power grid to write this essay. I find beauty in red barns, grazing cows, and rolling farm fields, emerald green one season, gold another. I’m not against  things that sustain and enrich human life. I’m against taking everything down to create something else entirely, something infinitely less diverse, less layered, less alive. Less wild.

There are solutions to our environmental challenges, and people are working on them with fierce urgency, Despite my mourning for lost wildness, it’s my nature to be optimistic. I have hope that we’ll find more sustainable ways of operating on this planet, and that we’ll continue to save what we can. But more sustainable cities, box stores powered with solar, a parking lot full of energy efficient cars, though much better answers than the ones we’ve given so far, still leave us with an impoverished landscape.

For now, my answer for this sense of loss is to find the remaining prairies, go out among the grasses and flowers, the grasshoppers and butterflies, listen to the rustling of the wind and the dry rasp of cicadas, and report back on what I find there.

There are more pictures in the Flint Hills Tallgrass Prairie gallery.

4 thoughts on “Saved by stone: the tallgrass prairie of the Flint Hills”