In a world increasingly governed by western notions of progress, people can find rights of nature an alien concept. Since the founding of ancient Rome, we have safeguarded property rights — the ownership of land, people, capital, resources — even when such rights work against the common good. Or even, as in the case of slavery, against the most basic principles of morality. Property rights belonged to the people who had the money to buy them or the military power to claim them. Colonizers assumed the right to arrive anywhere and claim the land, uproot both people and nature, and take whatever they wanted. And as we celebrate them to this day, we are still agreeing with them.

A couple of years ago I waiting for an elevator with several men who were attending a conference on forest management. They didn’t look like park rangers, so I asked if they owned forests. “Yes,” one said. “Lots of forests.” They were private owners, not corporations. It’s likely the return on their investment came from logging. I have no doubt the health of their forests was extremely important to them. Yet I suspect that had I asked “How do you protect the rights of your forests to live out their ecological role?” they would have waited for the next elevator.

But I was surprised to discover recently that people in the environmental movement had no idea what rights of nature mean. There’s a lot to think about these days, and it’s a small, new movement in a field crowded with urgency. Many people credit Supreme Court William O. Douglas’ 1972 dissent in Sierra Club vs. Morton with inspiring the movement. But there were people ready to run with his idea that “The critical question of ‘standing’ would be simplified…if we fashioned a federal rule that allowed environmental issues to be litigated before federal agencies or federal courts in the name of the inanimate object about to be despoiled, defaced, or invaded by roads and bulldozers.” He pointed out that other non-human entities — corporations, trusts, ships, for example — have standing in court through guardians.

Citing Douglas, law professor Christopher Stone, in his 1972 Should Trees Have Standing, was the first to explore the ramifications of these ideas. Thomas Berry introduced the phrase ‘earth jurisprudence’ and it was of paramount importance in his work. Starting in 1972, the UN issued a series of charters related to the human/earth relationship. Among them were the World Charter for Nature in 1982, the 2000 Earth Charter, and the 2010 Universal Declaration of the Rights of Mother Earth. In 2008 Ecuadorans included rights of nature in their new constitution. Thirty thousand people from all over the world were in attendance in Bolivia when the Universal Declaration of the Rights of Mother Earth was passed.

More books and many papers have been written, very active advocacy groups have formed. In the last few years, governments have begun to grant such rights all over the world. The earth-centered beliefs and historically sustainable practices of indigenous peoples are finally returning to the fore as more and more people realize how badly the ravening dream of the west has damaged the world we depend on. The photos accompanying this essay are places that now hold rights.

So what happened to make rights of nature move from a single dissent in a Supreme Court case to a worldwide phenomenon, even if still a relatively quiet one? This is the force of emergence, one of cosmologist Brian Swimme’s powers of the universe that I’ve been exploring. These are the energies working in and through us that can teach us how to move forward. They are the births in the history of the cosmos, starting with its own. Each one is both active and generative. The universe bursts into being and then creates the conditions for atoms to emerge. Atoms create the building blocks for eventual stars. The stars create the elements and gather into galaxies. “It’s radical,” Brian says. “There’s no galaxy, and then there’s a galaxy, and within the galaxies themselves you have the birth of planets, at least one of which becomes alive.”

Bangladesh has granted all of its rivers standing in court. Map via Wikimedia Commons

Carbon is an excellent example, since — especially to us carbon-based life forms —there is no more important molecule. In the beginning there was no carbon, so no chance of life as we know it. The emergence of the universe itself gave us hydrogen and helium, which gave us stars. Then, in the 100 million degrees of the early imploding stars, there was enough heat to fuse helium nuclei into carbon. As the stars collapsed, “suddenly carbon is flooding into the universe by the trillions a second.” For billions of years, carbon powered emergence after emergence, finally allowing us and all the species we share the earth with to come to life. “The universe is always seeking a new domain of emergence.”

Processes as well as forms emerge. The earliest, single-cell life forms became multi-cell eukaryotes. They needed hydrogen. As they took it from water, oxygen was increasingly released into the atmosphere until it became too toxic for life. The process of photosynthesis emerged, allowing cells to use oxygen for fuel. From that emerged the great flowering of life on earth. It’s a long, slow, deeply generative process. “The power of creative emergence involves groping, profound confusion. Millions of years of living with ambiguity. One idea isn’t good enough. You need millions of ideas. See which one finally takes off. That’s the nature of creative emergence.”

As my title suggests, emergence is the process of becoming and we are becoming the power of emergence. Because we have turned into the equivalent of a geological force — capable of altering the atmosphere, changing the chemistry of the oceans, forcing extinctions — we need to think about our role in and as this great power. If we create planetary conditions we can’t survive, we will turn out to be one of the universe’s unworkable ideas. In which case, the creative and generative powers of emergence will eventually sweep past us as the earth proceeds to rescue herself. If she survived 100 million years of meteor bombardment as a young planet, she will survive us.

The Whanganui River in New Zealand. Photo by Joerg Mueller via Wikimedia Commons.

But that can’t be what the cosmos is seeking. If the wild abundance of life on earth tells us anything, it’s that we live on a planet dedicated to bringing forth life. Ideas can seem unworkable and yet lead to new and flourishing forms. Eukaryotes and photosynthesis didn’t just show up one day. They were the end product of eons of experiments. The same happened with Homo sapiens. We are the survivors of many hominid experiments that didn’t last into our era. Let’s begin, Brian suggests, “with the assumption that creativity engulfs the whole universe and each of us. It’s not a question of becoming creative, it’s a question of enabling the creativity that’s already suffusing us to proceed more effectively.”

“And here is the amazing thing. The creativity actually knows what it’s about.” The experiments may be many, but they are not random. Going from the initial expansion of atoms to their coalescence into stars, to the gathering of galaxies and the birth of planets shows an emergent force with a drive toward creative order. That’s not to say the process is orderly. Far from it. “Emergence requires the softening or destruction of the order of the previous era.” Part of our distress in the present moment is the difficulty of living with the chaos that we have precipitated. Now, “our task as a planet and species is to reinvent the major forms of the human presence. It’s an activity that’s involving the entire earth, not something humans are in charge of. We are part of a process that goes back to the beginning of time.”

This is one of my favorite ideas: that we are energy from the beginning of time. We’re not only a result of these deep creative processes, we embody them and bring them forward. “It’s a single energy that begins 13.7 billion years ago and sweeps through to our moment. It’s complex, but it’s one process. So when we talk about moments of creative emergence in the past, we’re talking about the energy that we are in the present.” Far from feeling adrift on a lonely planet, this makes me feel “rooted in the very fireball,” grounded in the ancient yet present energy that brought me into being.

This doesn’t save me from the tension and grief our current state inspires, but it gives me an underlying faith in our own creative process. We are part of the cosmic forces calling for ever more life. As we explore our way out of the quagmire, we find new roles and tasks in the emergence of a healthy human/earth relationship. “The great discovery of the 20th century is that the universe assembles itself.” Atom by atom, element by element, cell by cell: the cosmos has been a flow of ceaseless creation. There’s been plenty of havoc. Cataclysm is also one of the great powers. But from the destruction of one form emerges the creation of another.

In moving from the mayhem we have caused to a new presence on earth, we enter into this ingenious and prolific force. A sustainable economy, different forms of education, more just and equal governance — all of these tasks cry out for our energy, faith, and creativity. From the beginning, the cosmos has continually transcended itself. Our very yearning for and dedication to a better world is part of that push. Learn to cherish this yearning, Brian suggests. “Think of it as your personal invitation from the universe to be involved with creative emergence.”

The patient genius
of transmutation 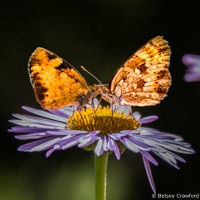