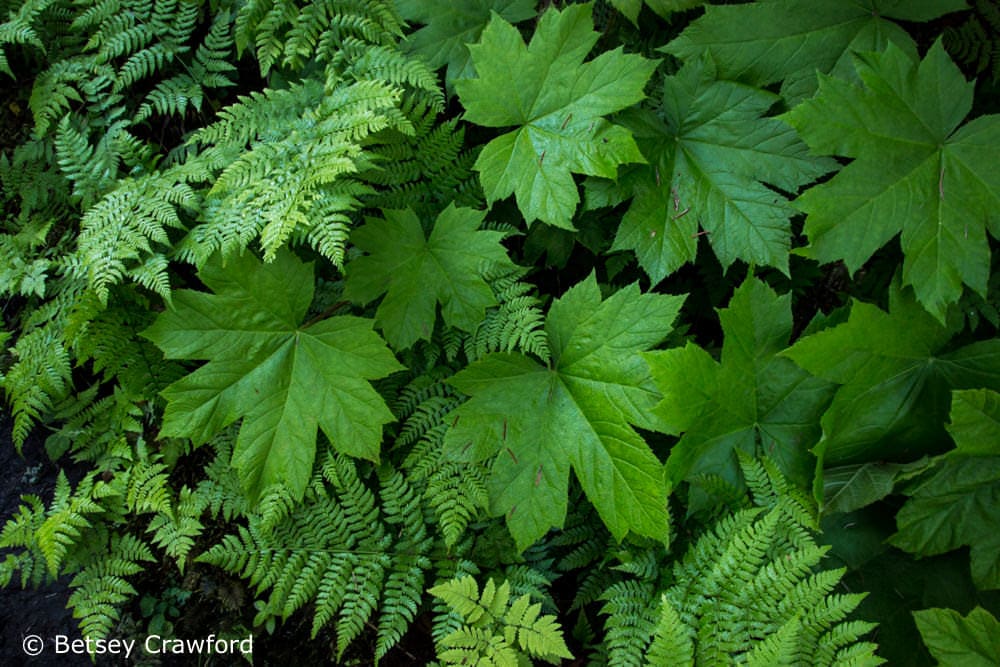 To love plants is to be in awe of photosynthesis. Even when you know how it works, it’s still a miracle. And a crucial, we-wouldn’t-be-here-without-it miracle. Its ramifications are so vast that once it showed up, it dictated all of the evolution that followed.

It’s also complicated. There is, for example, a catalyzing enzyme involved called ribulose 1,5-bisphosphate carboxylase oxygenase, with a personality as confounding as its name. Mercifully, we don’t need to go fully into those weeds. For most of us, it’s magic enough to know that somehow sunlight turns into sugar. But it’s so fascinating that I’d like to invite you to take a walk with me through this lovely, cool forest, and on out into the history of life on earth.

We’re walking in a sea of green because pigment molecules called chloroplasts in the tree leaves and fern fronds absorb all color wavelengths except the green ones. Those are reflected off the plants, and the highly sensitive cones in our eyes pick up the wavelengths and relay the information to our brains. So we see soothing, cooling green, a color widely associated with the serenity surrounding us in this quiet woodland.

Yet, every leaf and frond around us is pulsing with activity. Photons from sunlight hit the chloroplasts and their energy gets moved from one pigment molecule to another until it reaches special molecules in interior cells. There the energy excites electrons, which makes them pop into orbitals farther from their nuclei. Full of verve, these animated electrons start a cascade through surrounding, helper molecules, creating energy that pulls hydrogen ions into the center of the cell.

Missing electrons need to be replaced, and this first part of the process replaces them by splitting water molecules and grabbing electrons from the hydrogen atoms, whose remaining ions join the gang in the center of the cell. The oxygen disperses through the stomata, holes in the leaves that open and close as needed. This is the oxygen we breathe. The carbon dioxide we have been exhaling then floats into the stomata to be used in the next part of the cycle.

As the hydrogen ions in the cell’s center get more concentrated, they immediately want back out, pushing their way through an enzyme that creates ATP, the same energy storage molecule that our mitochondria create for us, by a similar electron process.

Having run through their energy, these electrons enter a new cycle where they are re-energized by more photons to create NADPH. Thus the electromagnetic light energy from the fusion reaction in a star 93 million miles away becomes chemical energy in microscopic cells brushing our shins as we walk, along the way providing the oxygen we need for life.

The chemical energy — NADHP and ATP — is then used by another process to take a gas — carbon dioxide — from the air and convert it to a solid state in the form of carbohydrates, which are strings of carbon molecules of varying complexity. (This is where the catalyst with the endless name comes in.) Thus carbon dioxide turns into food, as well as being ‘fixed’: removed from the atmosphere and stored in plants. This is why preserving and replanting forests are crucial to reversing global warming.

There are variations in the whole process, even in the woods. The leaves at the top of the trees, in the full glare of the sun, are likely to be smaller and thicker than the understory leaves. That way they protect themselves from the full force of the sun’s energy. The lower leaves tend to be larger, thinner and more horizontal, and the ferns grow many wide fronds, allowing them to catch all the photons they can from the sunlight filtering through the treetops. Because it tends to be cool and moist in the woods, photosynthesis carries on with little hitch.

Once we walk out of the woods into a meadow of grasses, there are challenges that require further variation. In the cool, damp spring, grasses are in heaven, soaking up water and sunlight, feeding their blades and roots, developing seeds. Once summer brings its hot, dry weather, many grasses go dormant until fall or even the next spring. The ones that don’t, like the sturdy crabgrass in your lawn, have adopted photosynthetic habits that allow them to keep going in heat and aridity.

If we walk further on, into the desert, the problems of heat and dryness become acute. Desert plants, like cacti and agave, want to keep their stomata closed during the day to preserve water. Instead, they open them as the evening cools, and have evolved a way to take in and store carbon dioxide in the form of malate at night. This they turn into ATP and NADPH during the day, with their stomata closed. It’s a far less efficient way to provide energy for the plant than the photosynthesizing in our woods, which is why desert and other succulent plants grow so slowly.

In addition to helping maintain the appropriate levels of oxygen and carbon dioxide in our fragile atmosphere, plants nourish themselves and the entire living world. We breathing creatures are carbon-based life: carbon forms the backbone of every molecule in our bodies. We’re entirely dependent on plants’ ability to take the carbon dioxide from our own respiration and not only replace it with the oxygen we need but also to offer those carbon molecules to us in edible forms. That’s what allows us to make our own ATP to fuel this lovely walk among the chloroplasts. Photosynthesis is the most important biochemical process on the planet.

Given its importance, it’s no surprise that it showed up relatively early in the earth’s life. Early forms of photosynthesis are thought to have begun about 3.5 billion years ago, its various systems developing over time. Chloroplasts didn’t evolve until 2.5 billion years ago. When photosynthesis began, there was little free oxygen on earth. Early practitioners were microscopic, anaerobic bacteria, most likely using hydrogen sulfide, better known as swamp gas, to do their work.

About 2.4 billion years ago, oxygen released by photosynthesis began to build up in the atmosphere, leading to what is known as the Great Oxygenation Event. The existing bacterial species weren’t adapted to it and began either to die out or find their way to anaerobic environments. With the evolution of mitochondria, which essentially use oxygen the way chloroplasts use carbon dioxide, species were able not only to adapt but to harness a much stronger energy source. Fueled by this huge boost to metabolism, life on earth blossomed into ever more diverse and complex life forms and ecosystems.

Besides our dependence on plants, there are a lot of wonderful connections among us. We all inherited our carbon from the very beginning of the universe, when the first particles coalesced into mighty mother stars who, with their enormous heat and compression, made the elements that form every subsequent thing. When we give a baby a fresh string bean to munch on, we’re watching 13 billion-year-old carbon join forces in ever new forms.

We share up to 25% of our DNA with plants, remnants of our ancient, shared bacterial ancestors. Mammalian hemoglobin and plant chlorophyll have the same chemical composition, though where hemoglobin is built around iron, chlorophyll uses magnesium. When we eat chlorophyll, it helps hemoglobin with its work of cleansing and strengthening our blood and increasing oxygen uptake. Chloroplasts and the mitochondria we share with plants have a similar history. Each formed when separate species of bacteria found it so worthwhile to join forces that they’re still at it, one cell inside the other, all while wrapped in their own membranes and keeping their separate DNA. Perhaps the most successful mergers of all time. Both make ATP — adenosine triphosphate — the fundamental fuel of the breathing planet.

Evolution has no need to keep inventing the wheel. If the DNA we inherited from those ancestral bacteria still work, great! If the methods of producing energy work for plants, why not animals? The same plans get reused, with some evolutionary tinkering. Because our building blocks came from those ancient mother stars, people like to say that we are stardust. Via photosynthesis, we are sunlight. Between the systems we inherited from and share with plants and the fact that they ultimately become part of every cell in our bodies, you could also say we’re recycled plants. An idea that, while not quite so lofty, thrills me no end.

It’s all a marvel. I breathe out carbon dioxide and it’s returned to me nicely packaged in carrots, apples, beans, sweet potatoes, squash. Amazing! The history is stunning, all the way back to the carbon formed at the beginning of the universe. We owe thanks to photosynthesis, and its introduction of atmospheric oxygen, for all the blooming, breathing life everywhere on the globe. We owe it every minute of our lives, every thought we have, every bite we eat, every breath we take, every flower and creature we treasure. I love the science that explores and tracks and theorizes about how this fascinating process operates. But ultimately, we are left with wonder. The whole parade is one miracle after another.

8 thoughts on “Living light: the crucial miracle of photosynthesis”