These gorgeous seeds and their vast number of relations are the foundation of life. Certainly for the plants that grow from them. And for the entire animal kingdom, which is completely dependent on them for food. Herbivores eat their plants and the seeds themselves. Carnivores eat animals that eat plants. We human animals have a special relationship with seeds. First, as eaters. If you had oatmeal or toast for breakfast you ate crushed seeds. Coffee? Ground seeds containing the energizing alkaloid caffeine, which creates a mild addiction we share with bees. Raspberry jam? Fruit containing seeds. Hummus for lunch? Crushed protein-rich seeds from legumes. Walnuts for a mid-afternoon snack? Seeds themselves, packed with nutritious oil. Some chocolate with that? Seeds filled with luscious fat. String beans for dinner? Pods containing ripening seeds. Spicy salsa on the side? That the heat of capsaicin-containing pepper seeds.

Our whole life is one seed after another. But that doesn’t separate us from our non-human kin. What distinguishes us is that we consciously plant them, and the discovery that we could do that changed everything. Once we found out how to create a reliable source of food by cooperating with seeds, we changed from hunter-gatherer nomads to settled communities. We were launched on a revolution we are still living today. Our 10,000-year history with seeds, and what has happened to this most interdependent of relationships in the last hundred years will be part two of this essay. In part one, I want to celebrate their brilliance.

Having waited in dormancy all winter, metabolism slowed almost to a halt, embryo protected inside a hard shell, they know how to measure the right mix of light, water, and oxygen. They know a passing shower is not the rainy season they’re waiting for. They know the forest they’ve lain dormant in for decades has burned and nutritious ash and volatile organic compounds have been made available, along with enough light to sprout and grow. When a drought ends, or a road is cut through, or a field plowed seeds know to grab their chance in the sun and air, take in water, begin to expand their cells, and wake up their sleepy metabolism.

They know to send out a tiny root that will find its way into the soil by the gravity sensors in its tip. They know their place well enough that many seeds can confidently do this in the fall to get a head start on the next spring’s growth. Many others know to resist the temptation of germinating in warm autumn soils and thus risk the winter freeze. Those wisely wait until spring. Seeds sense where they are, how deeply they are buried, whether the minerals, bacteria, and fungi they need are available. Some seeds wait years, even centuries, for the right moment. 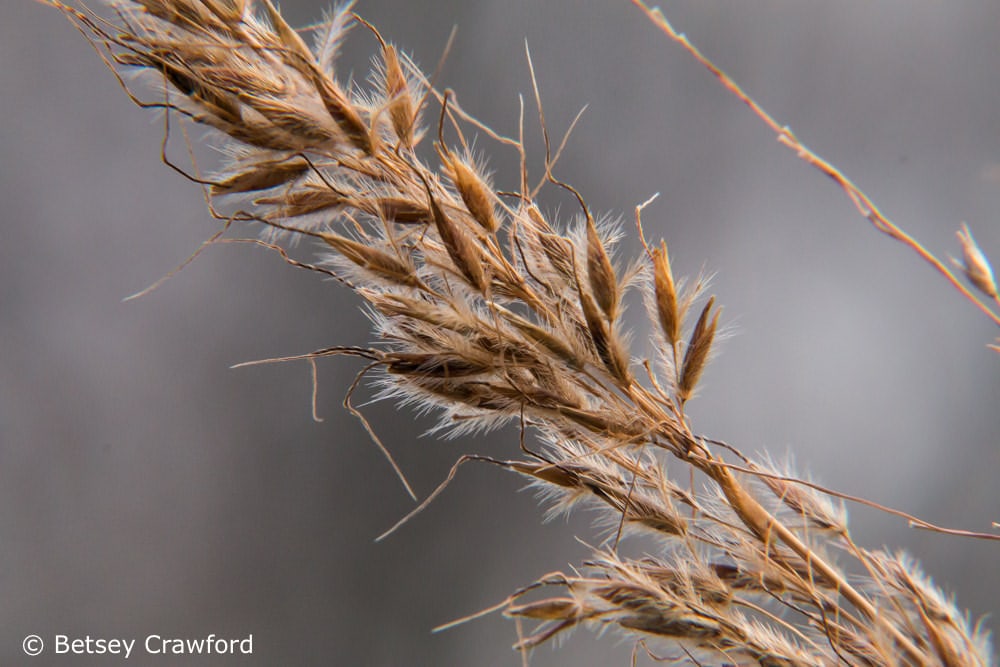 They know to send out one or two ‘first leaves’, cotyledons, to begin the work of photosynthesis, adding to the nutrients in the seed itself. Long before that they know to take one of the two sperm that makes it into the ovary as a result of pollination and make nutritious food out of it, usually the endosperm. Until photosynthesis starts, that’s what nourishes the embryo and seedling. And us: the endosperm of grains accounts for over 50% of human caloric intake worldwide.

In the long process of evolution, they have created a variety of endosperms and related ways to nourish themselves. Fat-filled avocado seeds have plenty of food for the slow time it takes them to start photosynthesizing in their native forests. The starchy seeds of grains and grasses give them the quick energy they need to take off in any open, sunny spot. Protein-rich nuts drive the long lead time it takes to launch a tree, and promise nourishment to the animals who handily spread them around and then forget where they put them.

They’ve worked out arrangements with pollinators and predators. Hard shells protect against rodents eating too quickly. They carry the heavy nuts — and often bury them — away from the mother plant, enabling young plants to better establish themselves. Seeds create alkaloids like piperine in black pepper, terpenes in citrus fruits, capsaicin in hot peppers to make themselves too unpleasant to eat. Then they work out further deals. Birds, who don’t mind the heat of capsaicin, but whose digestive systems are slowed down by it, thus carry the seeds farther abroad, handily depositing them in a small package of fertilizer.

After a summer of ripening, they take off on wings, feathery filaments, parachutes. They hitch a ride on animals, including humans. They drop at the feet of their parents to form colonies. The pods of lupines and other legumes pop open and shoot seeds away from the mother plant. Seeds can ride ocean currents for thousands of miles to establish themselves on far-off lands. Many know to ripen alongside the flesh they are encased in, which changes from protective bitterness to such sweetness that more and more dispersers are lured to them. Birds, bats, bears, monkeys happily spread apples, cherries, peaches, blueberries far and wide. Humans take fruit seeds and plant them in orchards. Dispersal to a good place for eventual germination is crucial to the survival and evolution of a species. Seeds know how to enlist the help they need, even from the tiniest creatures.

This varied and amazing wisdom has inspired 90% of plants to evolve the use of these protective, easily dispersed packages of nutrition, embryo, and intelligence to ensure the viability of the next generation. Of those, 80% are angiosperms, from the Greek for ‘seeds in a receptacle.’ The remaining seed producers are gymnosperms (‘naked seeds’) which predate angiosperms by 160 million years. They lack the protective seed coat of the angiosperms, important protection during dormancy. However, many of the gymnosperms, including all of the conifers, have evolved cones as a way to protect their seeds. 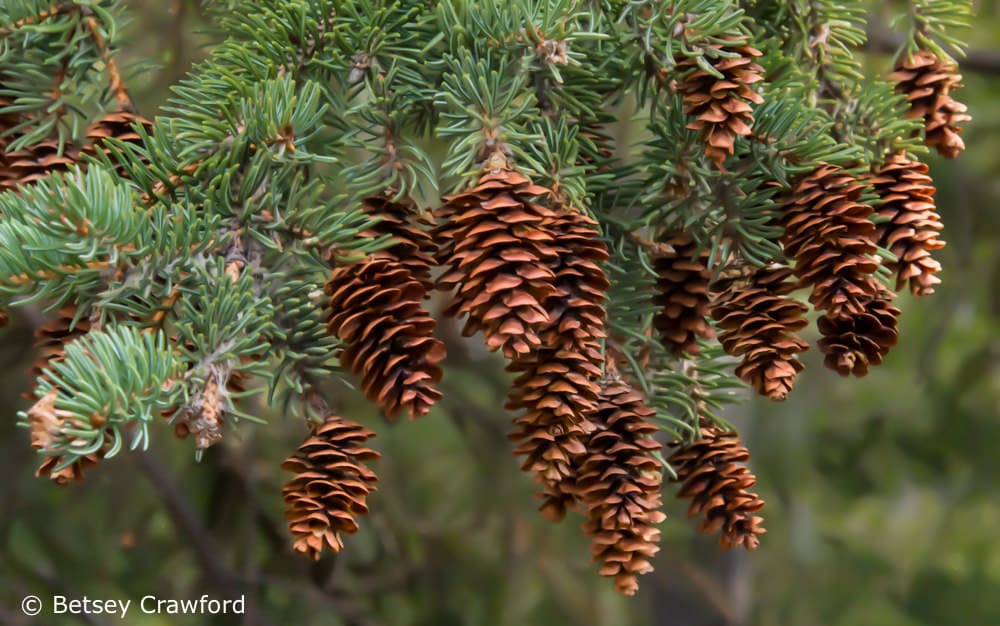 Gymnosperms, among our most ancient plants, are far less diverse than the angiosperms. Try parking your car near a pine grove on a windy spring day. Pines are pollinated by very fine, yellow pollen carried by the wind in fluffy clouds. Many angiosperms, especially grasses, rely on wind pollination, and it works wonderfully. But it’s a scattershot approach to reaching the precise spot you want fertilized, as you’ll see when you get back to your now yellow car. By tucking the egg deeply into the protection of the ovary, angiosperms created conditions for a multitude of goal-oriented pollinators: bees, butterflies, beetles, bats, moths, flies among them. This led to competition for the attention of these creatures, which in turn evolved into a large variety of shapes, petals, sizes, colors, scents, seeds themselves.

This explosion of diversity is possible because seeds efficiently combine the genes of two parents. Ferns mix them, too, via spores. But they use an ancient process so cumbersome that ferns are basically the same plant they were 180 million years ago. Seeds allow for evolution itself: the easy and continual mixing of the gene pool creates an endless array of subtle variations that allow plants to adapt to changes in the landscape, in pollinators, in temperature, in pests. Combining parental genes allows one species of wheat to become more drought tolerant than another, a flower to form purple petals from pink, a potato to better resist fungus.

How these multitalented beings do all this remains full of mysteries, though we have clues. Can seeds see light? Perhaps not the way we can, but they definitely see light and judge its strength and direction. Like us, they possess sensors and chemicals to allow this skill. Phytochrome enables seeds to register light energy, or the lack of it, at the red and far-red end of the spectrum. They judge the season by the length of the night, yet know if darkness comes from overhanging foliage because light filtering through green leaves switches from red to far red. Seeds also rely on knowing the temperature and moisture suitable for their species to judge when it’s time for the seedling to emerge. At that point, phytochrome switches gears, fostering growth and the increasing complexity of the emerging plant.

Are seeds conscious? Not, so far as we know, the way we are, but they are keenly aware of and responsive to their surroundings. They make choices and decisions. One can say it’s a chemically-mediated response to stimuli, but that’s how our brains work, too. I doubt the seeds lying in wait in the brown hills surrounding me are ruing the exciting days of last spring, or planning for the coming rainy season. That kind of consciousness seems to be our unenviable lot. Instead, they have a way of holding the spring that launched them and trusting the rains to come that I would love to emulate.

Those dry, dozing seeds have their own type of awareness. More important, they, like all of creation, hold the consciousness of the whole. The same wildly creative, ardent energy that brought the universe into being flows through every seed, every plant it forms, every creature it nourishes. It flows through us as we spend our days sipping and munching them, or planting a flower garden, or sowing corn to be sure we can feed our families.

As long as we treasure them, does it matter whether we think seeds have any kind of consciousness? The trouble is, too few people are treasuring them. By not regarding them as the vibrant, sacred trust that millions of years of cosmic evolution have bequeathed us, we’ve lost 90% of their vast diversity in the last hundred years. We’re stopping evolution in its tracks. That’s not just losing access to nourishment, which is devastating enough. It’s losing culture, history, connection, spirit. Far from treasuring them, we have given control of seeds to corporations whose only mission is profit at any cost. And the cost is unbearable.

Currently, seeds are treated as a commodity to be bought, traded, used, changed, profited from. That mindset will be explored in the second part of this series. If, instead, more and more of us see ourselves sharing with seeds the same co-evolved energy and wisdom that have made us partners for millennia, we will help prevent their destruction. There are many passionate people on this journey. Their hope and work will inspire part three of this essay.

12 thoughts on “The brilliance of seeds”