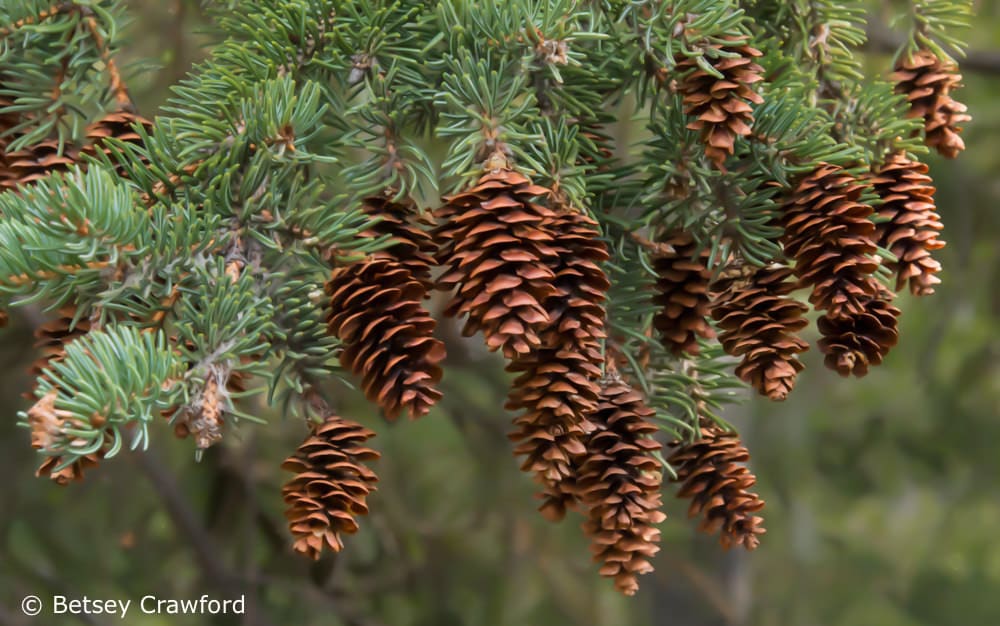 One of the first things we noticed when we drove into Alaska in July was that vast stands of spruce — and Alaska is full of vast stands of spruce — were dark brown at the top. Seeing them from a distance, as we drove through a valley, we wondered if they were suffering from a disease that was killing them from the tips. When we got closer, we realized they were laden with cones. At first, I assumed this was a normal approach to long summer days, but found, on a guided walk through the Wynn Nature Center in Homer, that 2015 was a mast year for white spruce.

Mast refers to the products of trees — cones, acorns, catkins — and many species have mast years, when they produce an above-normal abundance of seeds. Spruce cones are the primary food of Alaskan red squirrels. The squirrels live on the forest floor, digging tunnels under and around the roots of the trees, where the cones can fall right at their doorstep. They eat the seeds at the base of the female cone scales, tossing the rest of the scale and the remaining ‘cob’, out their front doors, where the ever-mounting detritus becomes a whole environment in itself.

Every few years, to keep ahead of the voracious squirrels, who can each hoard up to 9,000 cones a season, the trees produce extra cones. When our guide, Ruth, was telling us this, we joked that spruce had family planning all figured out. And that got me thinking about what we actually meant by those light words. What had they figured out? How had they figured it out? What in the spruce had ‘noticed’ that producing more cones every few years meant they could insure enough offspring without spending the energy to produce extra cones every year?

We know, if only from watching our dogs go into a decline the second we pull out a suitcase, that animals have consciousness and an emotional life. We don’t put it on a par with our own, and don’t, as a rule, apply any concept of consciousness to plants, though there is a growing, and utterly fascinating, body of work dedicated to exploring what plants know and feel.

In my work as a landscape designer, I would ponder why gardens grew better for some people and not others, given that their care was basically the same. I had a client who was extremely ornery. I learned quickly to call him in the morning so I didn’t run into his afternoon drinking. Despite a sense of humor and a certain amount of charm, he could be hard to be around. But his landscape was one of my all-time favorite jobs. He was an artist and a bon vivant. He loved beauty. He had been a photographer for Life magazine, and his house was full of lovely things from all over the world. His garden, despite his routine grumpiness, grew like mad.

A counterexample was a couple in their thirties, successful professionals, extremely nice, though not necessarily warm or charming. Their house was rather bleakly furnished. Every time we met, they both stood with their arms tightly folded the entire time. Their garden did the same thing. It dutifully grew, but it never took off into the kind of riotous abundance that my ornery client’s did.

Another couple with whom I worked for many years started out with a garden that grew grudgingly for a while. But, after both successfully recovered from cancer, it was fascinating to see how they and their garden changed. My clients seemed more at ease, more open. They renovated their house and painted every room a different luminous color from the sea and sky outside. Their garden grew more and more luxuriantly, and even unusually deep in color.

Though the idea of sharing a doctor’s waiting room with a bunch of plants has enormous appeal, spruce will clearly never follow our example on family planning: make appointments, discuss options, get a prescription, go to a pharmacy, remember to use whatever we get there. Instead, every few years, usually following a warmer prior summer, they will produce extra cones. To do this they have to ‘know’ something. To grow riotously for one person and not for another indicates a capacity to respond. To grow toward the light indicates a capacity to see. Plants don’t have the neurology we use to translate vision into images, as far as we know, but the chemical process is not that far from our own, and some of the genes that direct it are the same. Nature can’t be bothered to give every living thing its own personal set of genes, so both humans and plants have inherited genes from our common, ancient, bacteria ancestors.

I love all this because I love to contemplate our interconnectedness. I love the idea that I am, literally, in the same family tree with the spruces I pass on my hike. That I share up to 80% of my DNA with the squirrel chittering at me, up to 25% with the branch she sits on and the cone she’s about to hide. The ferns brushing my shins, the moss on the edge of the path, the fungal mycelium strands winding through the soil under my feet — these are all kin, descendants, like me, of our unicellular forebears. And, as carbon-based forms, we are all descendants of the earliest stars, whose death launched carbon into the universe.

We live in a world where we differ from all other humans across the globe by less than 1% of our DNA. Nevertheless, we’re having a hard time convincing our very tribal selves that we are all related. Given that challenge, seeing spruce trees and squirrels as family may seem like a low priority. But I find that feeling embedded in the life force that is also the forest makes it easier to remind myself, in the constant brush of personality that makes up everyday life, that underneath our wide-ranging but superficial spectrum of differences, we are all — every one of us — intimately connected.

I’d love to have you on the journey! If you add your email address I’ll send you notices of new adventures.