Since my brother’s death in June, words have been hard to come by, for writing, speaking, even reading. Poetry has been a companion; so much meaning in so few words. And, on these bright, blooming California days, the tender mercies of beauty have been deeply consoling. Perry, who started his landscaping business in college, told me while he was still able to contemplate such things that he was profoundly grateful that he could spend his life making the world more beautiful.

My daily life takes me past a garden where the quintessential June flower — roses — are still blooming in profusion. Their intricate, soft voluptuousness reminds me of some of the most luscious words ever strung together: Rainer Maria Rilke’s poem The Bowl of Roses. For this post, I am floating on his words. I’ve coupled them with photos of roses from the gorgeous Rose Hill in Spokane, Washington’s Manito Gardens.

The Bowl of Roses

You saw angry ones flare, saw two boys
clump themselves together into a something
that was pure hate, thrashing in the dirt
like an animal set upon by bees;
actors, piled up exaggerators,
careening horses crashed to the ground,
their gaze thrown away, baring their teeth
as if the skull peeled itself out through the mouth.

But now you know how these things are forgotten:
for here before you stands a bowl full of roses,
which is unforgettable and filled up
with ultimate instances
of being and bowing down,
of offering themselves, of being unable to give, of standing there
almost as part of us: ultimates for us too.

Noiseless life, opening without end,
filling space without taking any away
from the space the other things in it diminish,
almost without an outline, like something omitted,
and pure inwardness, with so much curious softness,
shining into itself, right up to the rim:
is anything as known to us as this?

And this: that a feeling arises
because petals are being touched by petals?
And this: that one opens itself, like a lid,
and beneath lies nothing but eyelids,
all closed, as if tenfold sleep
had to dampen down an inner power to see.
And, above all, this: that through the petals
light has to pass. Slowly they filter out from a
thousand skies the drop of darkness
in whose fiery glow the jumbled bundle
of stamens becomes aroused and rears up.

And what activity, look, in the roses:
gestures with angles of deflection so small
one wouldn’t see them if not for
infinite space where their rays can diverge.

See this white one, blissfully opened,
standing among its huge spreading petals
like a Venus standing in her shell;
and how this one, the blushing one, turns,
as if confused, toward the cooler one,
and how the cooler one, impassive, draws back,
and the cold one stands tightly wrapped in itself
among these opened ones, that shed everything.
And what they shed, how it can be
at once light and heavy. a cloak. a burden,
a wing, and a mask, it all depends,
and how they shed it: as before a lover.

Is there anything they can’t be: wasn’t this yellow one
that lies here hollow and open the rind
of a fruit of which the same yellow,
more intense, more orange-red, was the juice?
And this one, could opening have been too much for it,
because, exposed to air, its nameless pink
has picked up the bitter aftertaste of lilac?
And isn’t this batiste one a dress, with
the chemise still inside it, still soft
and breath-warm, both flung off together
in morning shade at the bathing pool in the woods?
And this one here, opalescent porcelain,
fragile, a shallow china cup
filled with little lighted butterflies,
and this one, containing nothing but itself. 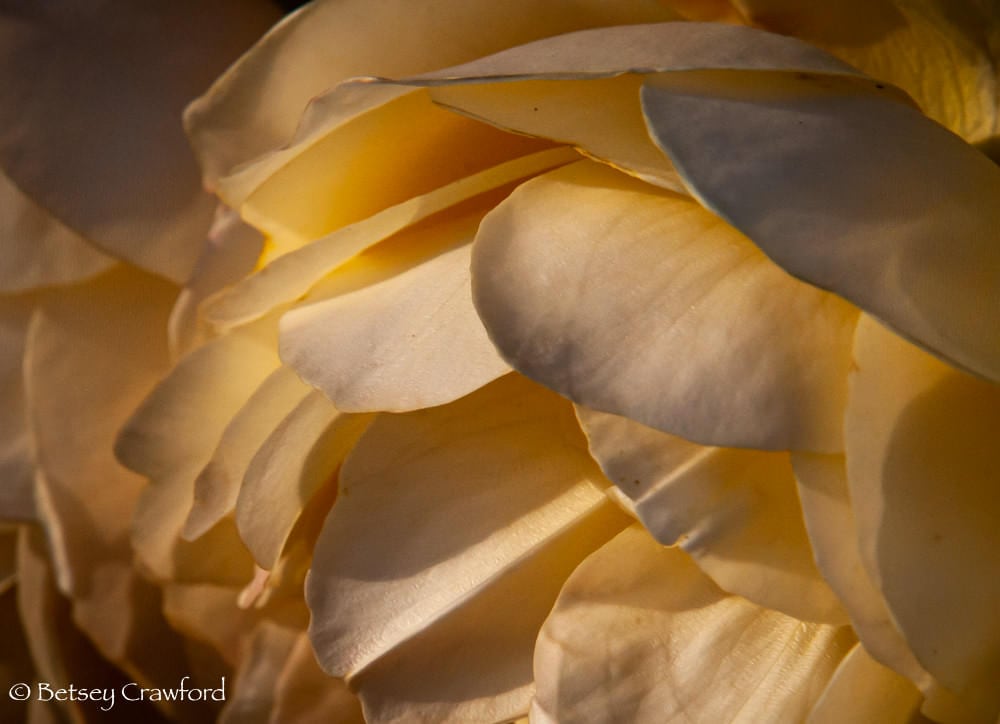 And aren’t they all doing the same: only containing themselves,
if to contain oneself means: to transform the world outside
and wind and rain and patience of spring
and guilt and restlessness and disguised fate
and darkness of earth at evening
all the way to the errancy, flight, and coming on of clouds
all the way to the vague influence of the distant stars
into a handful of inwardness.

Now it lies free of cares in the open roses.

9 thoughts on “The Bowl of Roses”