Pursuing mystery: how we found out lichen has a third partner and is saving the earth 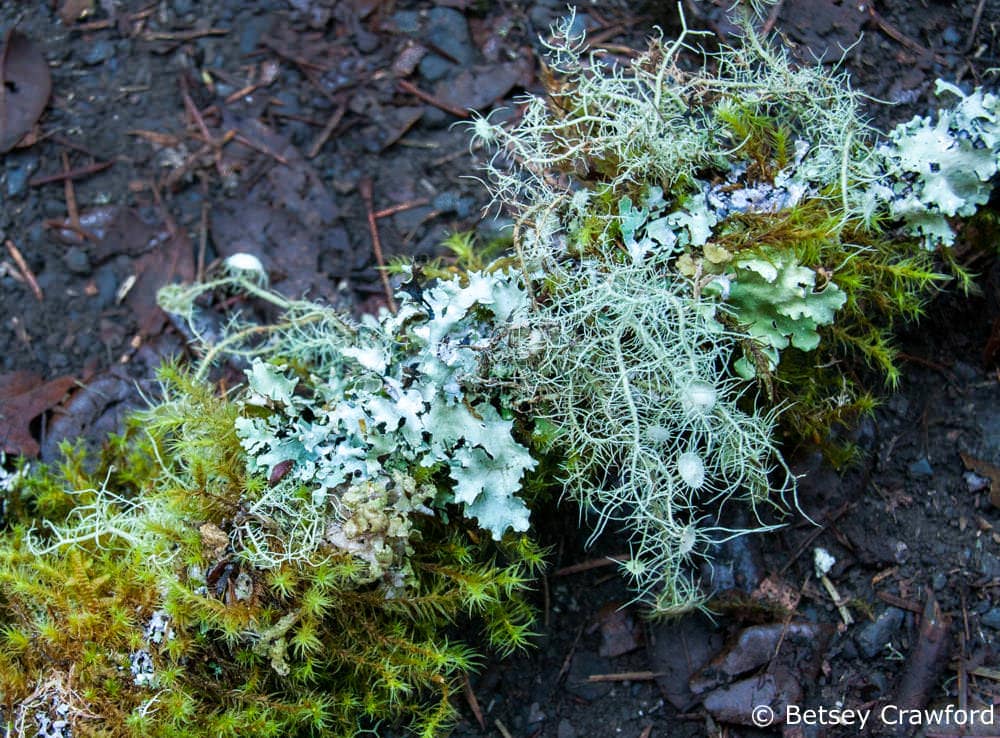 For 150 years lichen has been known to be a combination of two life forms. The outside is a fungal matrix, rather like the crust of a baguette,  which gives structure and protection to the softer, more filamentous inside, formed by one of the algae family, or occasionally a cyanobacteria. These latter two provide nutrients for themselves and the protective fungus via photosynthesis. The word symbiosis (Greek for ‘living with’) was coined in 1868 specifically to describe lichen’s interrelationships. When I wrote my first post about lichen two years ago, this is where our knowledge stood. A few months later, that changed. A hidden partner had been found, and the story of that discovery is wonderful.

As is appropriate to its subject, the entire project was a symbiosis. Montana lichenologist Toby Spribille was inspired by an essay by British Columbia lichenologist Trevor Goward. Trailing like long strands of hair from the branches of Pacific Northwest trees are two lichens formed by exactly the same fungus and alga. But they are different colors. Tortured horsehair lichen (Bryoria tortuosa) is greenish yellow, a result of the production of toxic vulpinic acid. Edible horsehair lichen (Bryoria fremontii), also called wila, is dark brown, does not produce a toxin, and was an important food for indigenous northwest peoples. They were thought to be different until genetic testing came along, so we need to include the genome pioneers in the team.

Growing up in Montana, Spribille had always been fascinated by the forests of hanging lichen. But he may well never have been in a position to explore them. Despite his yearning to study science, he was home-schooled in a family that didn’t believe in it, so he couldn’t do so until he left home. Then he was faced with the hurdles of finding a university he could afford that would accept him without a formal high school degree. He heard that European schools are more open to people like him. Since his family spoke the language, he went to Germany, where the University of Gottingen took him in.

After getting his Ph.D. at the University of Graz in Austria, Spribille showed up at the McCutcheon Lab at the University of Montana, which specializes in symbiosis. ‘I study lichens,’ he said, and was warmly welcomed by John McCutcheon, who urged him to study genomics, as well. Genetic analysis was crucial to his discovery since scientists have spent many years probing lichens under powerful microscopes without seeing the hidden partner. Inspired by Goward’s query, he began poking around in the Bryoria genome to see what caused the two seemingly identical lichens to be different.

Even with genetics on his side, and the McCutcheon team to brainstorm with, Spribille couldn’t find anything new until he decided to expand his search. The fungi long associated with lichen are from the Ascomycota family, and he looked for their genes first. Then he decided to look more broadly at the whole fungal kingdom and discovered genes from the Basidiomycota family, home of the types of mushrooms we’re used to eating. Excited but doubtful, the team wondered if they’d stumbled on a passing impurity or an infection. It wasn’t until he took the basidiomycetes data out of his calculations that he saw that the production of vulpinic acid went, too. That, he says, was the eureka moment.

Actually seeing the fungus cells involved high tech genetic tagging with fluorescent colors to visually separate the alga and the two fungi. It also involved — my favorite detail — a very low tech trip to the grocery store to buy laundry detergent. The basidiomycetes were under a crust of polysaccharides on the surface of the lichen, and Spribille used the soap to dissolve the coating. That enabled him to tag the newly found yeast cells with their own color and to see that they surround the lichen, embedded in the outer cortex. The yellow Bryoria tortuosa had lots more of the yeast than the edible brown fremontii, which is what enables the former to produce vulpinic acid.

Soon after he hit his eureka moment, scientists all over the world got involved, and it was quickly found, now that they knew what to look for, that varieties of the newly discovered Cyphobasidium yeasts showed up in 52 other genera on six continents. As with the Bryoria, their presence helps explain differences in appearance in genetically similar lichen. The team expands, the search continues, and the lichen world is forever changed.

I’ve planned for a while to update my lichen post. What got me thinking about it now is my fascination with the origins of Project Drawdown, which I wrote about in my last post. It started with Paul Hawken asking a question no one else was asking. In his case, it was ‘what are we already doing that can actually reverse global warming?’ It seems like such an obvious thing to ask, and yet brilliant scientists and policymakers weren’t doing so. Like Isaac Newton wondering why the apples in his orchard fell downward and not sideways, many seemingly simple questions, asked by people who then proceed to pursue the mystery, revolutionize our knowledge and perceptions.

White snow lichen (Flavocentria nivalis) with alpine bearberry (Arctostaphylos alpina), mountain harebell (Campanula lasiocarpa) and other alpine plants make up the tundra of the Yukon. Note the light and dark lichen on the rock.

Surprises in the lichen world are rare enough that the story made headlines. The more attention, the better, since lichens are crucial to the health of our planet. We know this because another team pursued a question no one had asked. Climate researchers have long studied the amount of carbon held in oceans and forests. But it wasn’t until 2012 that scientists at the Max Planck Institute for Chemistry in Germany wondered about the carbon impact of cryptograms, which are photosynthesizers that don’t flower, like mosses, algae, and lichen.

Together these tiny life forms cover 30% of the earth’s plant-bearing soil surfaces. Lichen alone covers 8% of the planet, which closes in on 16 million square miles. The team found that cryptograms sequester about 14 billion tons of carbon dioxide each year. That’s 12.7 gigatons, which is the measurement used in Drawdown. The number one solution there is estimated to make a difference of 89.74 gigatons between now and 2050. Using simple multiplication (though I suspect it’s more complicated than that) lichen and its cohorts could sequester over 400 gigatons by then.

The carbon cycle is the most widely studied and reported aspect of global warming. Also crucial is the nitrogen cycle, which, now wildly out of balance, is producing another dangerous greenhouse gas, nitrous oxide. There, too, the cryptograms shine, by taking close to 50 million tons of nitrogen from the air and putting it into the soil each year, where it’s a crucial nutrient. This is part of another important role they play: breaking down rock and creating and stabilizing soil in barren landscapes.

Given all it provides for the stability of the earth’s fragile atmosphere, it’s ironic, and tragic, that global warming is itself the biggest threat to lichen’s existence. Though most of us rarely think about these life forms, we depend on them. But that shouldn’t surprise us. The slow wisdom of evolution put lichen in place 400 million years ago. DNA analysis shows us that the newly discovered yeasts joined forces with the original partners 100 million years ago. The cyanobacteria that sometimes takes the place of algae in the mix has been here for 2.5 billion years. They were the first photosynthesizers on the planet, creating the oxygen-rich world everything has depended on since.

The first human fossils are a mere 2.8 million years old. Our possibility lay in the same possibility of all the beings we share the planet with: cycles of oxygen, carbon, nitrogen, water, soil building, plate tectonics and temperature regulation. These forces create and maintain the thin crust and surrounding atmosphere that provide our delicate envelope of life. Lichen’s carbon and nitrogen regulating abilities aren’t evolutionary accidents. They are traits carefully evolved to provide a living, breathing world for themselves and each subsequently evolving being.

In a culture where embracing interconnections within our own species is a huge challenge, it may be hard to fathom how deeply our existence is interwoven with a being that is itself created by an interweaving of beings. All of earth’s forms, including ourselves, are both presence and possibility on our paths through existence. The whole planet is a symbiont, a network of intimately and intricately related parts, each evolving detail generating deepening possibilities for the whole.

Lichen and other cryptograms are dominant in the tundra of northern Canada and Alaska. Here snow lichen (Flavocentria nivalis) lives up to its name in Tombstone Territorial Park in Yukon.

The intimate bond:
humans and dirt