The act of looking, of paying attention, is akin to prayer for me. It can be transporting….Plants are my doorways to wonder.
~Robin Wall Kimmerer~

The first year I saw nothing but handsome, corrugated leaves with irregular brown markings. They reminded me of the trout lilies in my native northeast forests, so I looked forward to the flowers that would show up. But they didn’t. Though the leaves looked like the type that would accompany flowers, forests have lots of plants that leaf but don’t bloom, so I wondered if that was the case. Or was it an off-year for that plant? Were they biennials, which bloom every other year? Or had I missed them?

I was new in California and a friendly woman in a yoga class had welcomed me and filled me in on a few nearby trails, including a two-mile loop at the top of King Mountain. It wasn’t a regular hike for me, so I could easily have missed the flowers. I determined that I’d go earlier the next year, which I did. That year I saw stems. The bloom having finished, the stems now curved over the edges of the leaves and were producing a seed pod that would drop its seeds handily onto the forest floor. So now I knew I had a flowering plant and was determined I would stalk them the next year, starting in January, to see if I could see the flowers.

They are not easy to find. The picture below was taken in a well lit spot about 18 inches above a couple of plants with eight blooms between them. They are small and their dark purple and cream striping produces a speckling which blends easily with the surrounding variegated scene. As do the mottled leaves. But one day, to my utter delight, I finally saw my first flowering Scoliopus bigelovii. Scoliopus is derived from the Greek for curved foot, for the way the stem curves over the leaf. Bigelovii is after nineteenth century American botanist John Milton Bigelow. Credited, as is too often the case, with discovering a plant that had been well known to indigenous people for at least 10,000 years.

But let’s ignore that uninspiring term for now, because nothing can beat its common name: fetid adder’s tongue. Part of its charm is that it doesn’t make much sense, unlike a name like buttercup, which describes a yellow, cup-shaped flower.  Adder’s tongues have a particular affinity for redwood forests, which are indigenous to California. But the state, home to ten different types of rattlesnakes and even a few boas, doesn’t host adders. All snakes’ tongues are forked, but there are no obvious forks here. The reference is to the divided tip of a  stolon, or runner, that travels underground, connecting plants and starting new ones. So fetid is the only part of the name with some immediately apparent facts behind it.

Fetid implies the plants have an unpleasant smell. It doesn’t permeate the air around them. Since they’re only a few inches off the ground, I had to sniff  a few to find one that smelled like anything but a rich forest floor of humus and slowly composting redwood and fern stems. Eventually, I found a flower with a distinctive odor. Not terrible, but certainly not something you’d choose. It reminded me of having a wet dog in the back of the car. A smell which must appeal to the fungus gnats that pollinate adder’s tongues in the chilly months before bees are active.

Two years ago I moved onto the side of King Mountain. To get to my apartment, you drive up a steep hill for a quarter of a mile. To get to the loop from there you hike up a steep fire road for another quarter of a mile. So now it’s my backyard hike, which means it’s been an almost daily walk in these covid-quiet times. All of the loop is forested. About a third is redwood forest, and the adder’s tongues start and stop at the boundaries of that section.

This year, as if consoling us for all we’ve been through, wildflowers are abundant. Delicate milkmaids, vivid blue houndstongue, bold white death camas are all blooming more than usual. The adder’s tongues have gone mad. No need to keep stalking. Because those curving stems drop their seeds next to the plant they’re from, they grow in colonies. Helpful ants, who thrive on the nutritious elaiosomes of the seed, pick some up and carry them away to their nests, thus creating new colonies. This spring they are spread out on the forest floor in one place after another. It’s hard to imagine the years when I could barely find them. They seem to be looking for me at this point. 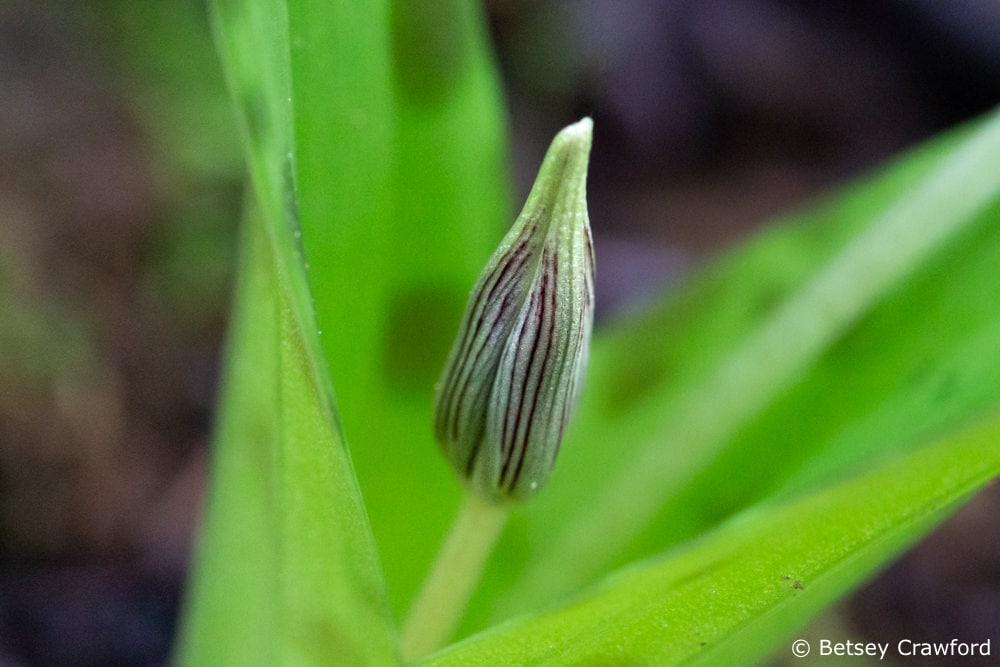 Which is not much of a stretch now that we know plants have ocular cells in their leaves. As I bring my eyes close to them, are they looking back? We know they have the ability to sense and respond to their surroundings. That they communicate with the forest around them. Am I, bending over them with my camera, considered an attacker? Do they send chemical signals to other plants that I’m a danger? Or do they read my love for them? Plants can learn and remember. They create relationships. When I come to visit, day after day, do they get used to me? Do they learn the chemical signals I give off? Are they always slightly wary, or do they welcome me after a while?

I give them the greatest gifts I have to offer — love and the desire to pay deep attention. I watched their green shoots push out of the dried leaves and redwood twigs on the forest floor. I watched them curve open, watched the pointed oval buds slowly rise on delicate stems and the striped sepals open. Saw their spiky petals rising above the anthers and stamens, lending a somewhat gothic air. I never saw the fungus gnats, but when bright yellow pollen was spilled on the sepals I knew they had been there. Then I watched the sepals slowly fade as the weight of the swelling ovaries brought the stems curving to the ground.

Now, though wistful at the flowers’ fading, I am watching for the ripening of the fruits as they open and release their seeds. The leaves get longer and more pointed as they age, and will eventually disappear. In this quiet cycle in the heart of the forest, they are giving me the greatest gifts they have: life, beauty, mystery, a glimpse of the deepest creative forces of the cosmos, wonder, awe. Though these blessings are particularly comforting after the losses of the past year, the earth offers us such profound nourishment all the time.